By Laurel Gross
October 7, 2008
Sign in to view read count 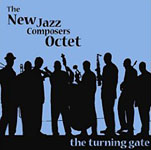 Trumpeter, composer, arranger and bandleader David Weiss has been a fixture on the New York scene since returning to the city of his birth after graduating from North Texas State. Leader of the long-running  New Jazz Composers Octet, Weiss continues to evolve.

The Turning Gate, the third album from the NJCO, though the first under the Motema Music label, proves that Weiss has big and excellent ears—not just in terms of his own playing and composing but in providing an outlet for some of the best talent available in this town or anywhere. Offering well-constructed original works full of vitality and invention by the leader, pianist Xavier Davis, saxophonist Myron Walden and bassist Dwayne Burno, this new disc is at times contemplative and understated but also bold and adventurous.

Here’s a group that listens to each other and fully respects each other’s intentions and personalities; no grandstanding, no stepping on each other’s toes or aims. If these guys have any bones to pick with each other you don’t hear it. What you do hear is fine music, logically composed and masterfully executed by all the musicians above plus trombonist Steve Davis, saxophonist Jimmy Greene, baritone saxophonist Norbert Stachel and Nasheet Waits on drums.

A listener doesn’t have to know all the thought that’s behind these pieces to appreciate them fully, though the supplementary material in the notes doesn’t hurt. For instance, each of the six movements of Xavier Davis’ “The Faith Suite” explores the idea of a different kind of faith, or lack thereof—including allusions to the Biblical stories of Noah as well as David and Goliath. Weiss’ title track explores a cyclical theme alluding to a Korean legend that states, according to Weiss, “happiness is just around the corner always out of reach.” Yet while such themes might sound cerebral the music itself is accessible and whatever the inspiration, the overall sound throughout feels heartfelt, never mechanical.