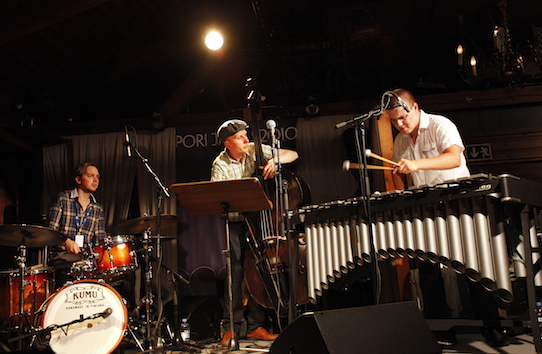 With their emergence onto the Finnish scene in 2009 in the national competition for the Nordic Jazz Comets award (won that year by the Icelandic Ingemar Andersen Quartet) the Herd trio have been making waves in northern waters ever since. This gig, however, in the newly opened premises of the Koko Jazz Club—now across Helsinki's very short 'Long Bridge' and behind Hakaniemi Square—was their first in the capital since the band had performed at the opening of the town's brand new, state-of-the-art Music House in September 2011.

The two venues could hardly be more different: the earlier event on the pristine 'vineyard layout' main stage, broadcast to the nation to showcase the wide variety of excellent music to be heard there; the latter from the converted antechamber of a local theatre, re-equipped with quality reproduction system and tasteful photo-montage decoration, but maintaining the intimacy of its former premises with a pleasing range of second hand art-deco sofas and chairs. And the range of music within the boundaries of a vibraphone-led trio is the attraction, too, of this young team of jazz pros.

In fact, to classify the band as being led by the mallets of Panu Savolainen could be misleading. Although the concert opened with his recently composed "Tango for Berlin," named for his current residence, the evening picked up tempo and tension with Erik Satie's "Gnossienne nr. 1" arranged by bassist Mikko Pellinen, and then his own composition "Farewell." All the players have considerable experience playing outside this ensemble, and brought this as well as compositional skills to their repertoire.

Inevitably, though, it's Savolainen who was most in the spotlight, leading from the front of the stage and composing four of the evening's ten numbers. Using a wide range of attack, his versatility dispelled any prejudice that the vibraphone is suitable only for lounge bars and accompanying lizards. Many of the band's pieces are low key at heart, but are as likely to lurch into disturbed seas as to stay in the gentle mainstream, as in Pellinen's intriguing "Dreams and Fears." Drummer Tuomas Timonen's confident, often straightforward, but never straight-laced solos appeal to a rock-related audience, with some soft tom passages combining with Savolainen's romantic melody lines to resemble early Pink Floyd. But along with Pellinen's unshowy bass, the band proved that their limited recent exposure hasn't blurred the lines of their instincts for tight interplay and exploration of a modern groove—despite, if not because of, their avoidance of any sound manipulation and their tight, classic approach to the music.