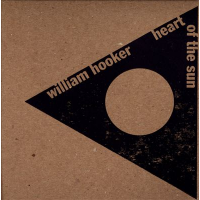 Suddenly Heart Of The Sun from veteran drummer William Hooker's The Gift looks a whole lot more poignant. With the passing of trumpeter Roy Campbell in January 2014, Hooker has been deprived of one of his longest collaborators. Campbell first appeared alongside the drummer on Colour Circle (CJR, 1989) as part of the self styled three member William Hooker Orchestra, and then later as one third of The Gift on Live at Sangha (Bmadish Records, 2005). As ever here Campbell mixes speedy proto bebop outbursts with an earthy lyricism, this last trait being particularly appropriate as Hooker, in what seems something of a new departure, introduces more overt melodies than often found in his spirited concoctions.

Captured on a live date in Brooklyn's Roulette in early 2013, the continuous performance splits into eight cuts, with the divisions selected at suitable junctures, often when the leader prompts, cajoles and signals a change of direction through his controlled but free drumming. Multi-instrumentalist David Soldier completes the threesome, alternating between violin, banjo and guitar, and often providing the rhythmic elements which create momentum. It's not until the third track "Snowflakes" that Hooker adds a steady beat, behind Soldier's bluegrass inflected banjo, but it remains a fleeting moment, as the drummer most often punctuates in a portentous rubato, akin to orchestral timpani.

No matter that echoes of Americana and folk rub shoulders with abstract timbral explorations, energy levels stay typically high. Nonetheless there is an episodic quality to the seat of pants navigation that recalls a film soundtrack where one character's theme abruptly gives way to another. That's most obvious on tracks like the opening "Reflector Of Truth" and later "Seat Of Green" where honeyed exclamations from trumpet or violin transform into grainy dissonance and extreme registers before switching back to sweeter gambits. Of special note is the joyous celebratory violin hoedown which breaks out on "Rainwater," as Campbell spins a trumpet obligato. It feels like the perfect ending, but Hooker has other ideas and it is not until after the brief but atmospheric musings of "For Leroy..2" that this enjoyable disc ends, fittingly with a breathy exhalation from the now departed trumpeter.