By MARK SULLIVAN
December 19, 2016
Sign in to view read count 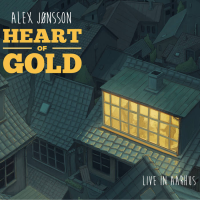 Recorded live at a living room concert, Heart of Gold presents an intimate portrait of Danish guitarist/composer Alex Jønsson and his trio. The title tune opens the set: it's not the well known Neil Young song, but it does have an Americana tinge. Drummer Andreas Skamby sets up a pillow of sound using mallets, bassist Jens Mikkel Madsen plays a repeating bass pattern, and Jønsson's guitar sings the tune. When he solos he usually favors single note lines with a clean tone, like a contemporary Grant Green.

He takes over the repeating pattern for the bass solo at the end, and the bass has the last word—a smooth swapping of roles which is typical of the conversational tone of this group. Most of the set maintains that sort of low boil: it's notable that Skamby uses brushes for the majority of the tunes, never picking up a pair of sticks once (which of course could be related to the living room setting). "Näkemiin, Nesøya" is played entirely rubato, an atmospheric sound typical of many ECM recordings. "Et deilig land å reise fra" again gives the bass an extended solo which continues on to end the piece, accompanied by guitar and drums.

"War Is Peace" is a dramatic departure from the sound of the rest of the set. Skamby switches back to mallets, and Jønsson employs overdrive and tremolo, in addition to playing with a pronounced rock influence. It's quite a contrast, and it takes the album to an interesting, different place. Jønsson's group should interest fans of countryman Jakob Bro's trio recordings. While he has not developed a comparably distinctive voice, he's getting there.