By Troy Collins
October 8, 2007
Sign in to view read count 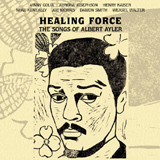 Widely misunderstood and commonly misinterpreted as a commercial sell-out, Ayler and Parks' collaborations featured her "universal consciousness" lyrics delivered with boundless, amateurish enthusiasm, while Ayler restrained his outré playing to more acceptable R&B standards. Ayler never got a chance to fully explore these later works; his body was found floating in New York's East River in 1970.

Drawing material exclusively from his final albums, Love Cry (Impulse!, 1967), New Grass (Impulse!, 1968) and Music Is The Healing Force of the Universe (Impulse!, 1969), Healing Force: The Songs of Albert Ayler revisits these underappreciated works with empathetic devotion, recasting them for a new generation.

Despite the unintentional camp factor of Parks' amateur evangelism, the septet does a stellar job of transposing the optimistic naiveté of the original texts into a more reticent, cautionary view. Case in point—the endearing gospel fervor of "New Generation" was once a buoyant celebration. Now, Josephson's icy delivery is underscored by a sinister metronomic backbeat and a haunting guitar vibe that recalls early Sonic Youth.

Revealing copious moods and dynamics, the ensemble veers from whispery AACM-styled musings to scorching collective torrents. Alternating acoustic and electric modes, the brisk angularity of Morris is contrasted by the blistering, fret-board shredding of Kaiser. Golia shares Ayler's unhinged passion without resorting to imitation, while Josephson's alluring vocals endow these unconventional tunes with an austere dignity.

Healing Force: The Songs of Albert Ayler suggests a critical re-evaluation of the master's late period works is well past due. For those interested in the limitless bounds of an unfettered tradition, there is much here to rejoice.

New New Grass/Message From Albert; Music is the Healing Force of the Universe; Japan/Universal Indians; A Man is Like a Tree; Oh! Love of Life; Thank God for Women; Heart Love; New Generation; New Ghosts/New Message.