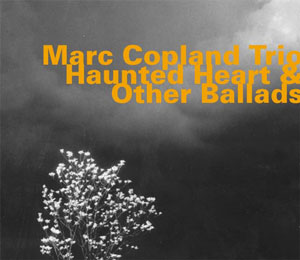 Anyone who is not by now familiar with the story of Marc Copland should first hear this before they read this review and then hear the disc it is about. The fact of the matter is, Marc Copland did not take up piano until the age of 35. That's right- Copland was originally a saxophonist, and quite a fine one at that, being very active on the New York scene in the 70s until he began to have the realization that he could not adequately express the lyrical possibilities he was thinking about in music on a horn- no, he would have to resolutely "sit down" at the piano, and play until he could make that black-and-white mass choir sing.

The story as we know now had a happy ending, as "Sing" Marc Copland's piano playing now does without question. And actually, there is more to this, as not only his lyrical style, but his harmonic sophistication, his touch, and control of dynamics with the footpedal have all become well- the stuff of legend. There are actually stories of young piano players who go to a Copland gig and then sit right near the stage to stare at his feet, to observe the nuance of how he works the damper pedal of the piano. But a pedal exhibitionist, no- a "master": yes.

So today Copland is widely respected amongst those in-the-know on the jazz scene as a quiet giant of "his" instrument; there is nothing outwardly revolutionary about his playing but his sheer refinement and understated excellence is a revelation in- itself. His peers, from Joe Lovano, to Charlie Haden, to Billy Hart, have all pointed to Copland as a "heavy" on the scene today. And while it may be confouding how one could make such a claim on behalf of their second instrument, begun at age 35, Copland has nonetheless made believers. Anyone who has had the opportunity to play with him or hear him play quickly learns this was not the stereotypical musician picking up a second instrument in his middle years; no, this was a "man on a mission"- and the redemption of an unfulfilled muse it would seem. Copland had to express his muse in a better way.

We can hear Marc Copland and his trio express their muse amply here on this first record for Hatology records, "Haunted Heart and Other Ballads." This is a ballad record that is dedicated to exploring ballads in all of their nuance and complexity. Copland reveals his philosophy on this recording in his liner notes, when he writes "Playing ballads, is in many ways, the ultimate musical challenge. A ballad is like a window into the soul of the artist..." A voluntary invitation to see musical nakedness- and it would seem that we as listeners are offered more than a glimpse into the soul of Mark Copland and his trio compadres here. Every tune on the program is a ballad, most well known, including "Soul Eyes", "It Ain't Necessarily So" and "Easy to Love." And there are some intriguing wrinkles in the program; John Coltrane's "Crescent" being only the most obviously intriguing piece to be covered by an impressionistic piano trio. A further, perhaps deeper connection to John Coltrane's aesthetic though is involved in the inclusion of two simple, yet totally melodic tunes Trane favored: My Favorite Things and Greensleeves. Like Trane Marc Copland evidently sees something very compelling in a simple folk melody like Greensleeves; he sees beyond the deceptive simplicity of such interval-grounded tunes and as such sees something very worth exploring. Finally, there is also an uncommon "pop" tune here represented in- common with the rest of the program. The often-subtle balladry of Sting is represented by "When We Dance."

The treatments given to the tunes aboard here are all in a word- sublime. The Marc Copland trio navigates the feeling of each tune in a very open and honest way; there is no self-conscious cleverness here, nor is there any affected melodrama. This is not to say these ballads are given "straight" or "classic" readings by the trio though. Indeed, a thoughtful and deliberative interpretation in the interest of making an old tune fresh again- is one of the hallmarks of this trio. Trane's "Crescent" is transformed from the sort of anthem-like feel Trane had written it with into a kind of loving dedication, more akin to "Naima" in its essential mood. "Greensleeves" is made at home as a "quiet song" that like Crescent, lolls along in a totally peaceful way, letting itself decompress as it were. And My Favorite Things is the exception on this record- Copland plays this song solo, and thrice, and with each take he contributes some fundamental insight about the tune through harmonic substitution or rhythmic variation, and most of all- phrasing. If there is anything in which Copland demonstrates all too well here, it is melodic phrasing.

Here on the Marc Copland Trio's recording of ballads then, we hear an very connective and empathetic trio at work that treats these ballads as if in a constant state of rumination and appreciation for their beauty. Along with Drew Gress and Jochen Ruckert, Copland "makes peace" with songs. As it turns out they not only reward these songs, but they reward themselves, as they make beautiful music here in their respectful and honest approach.

While "ballad records" don't always generate a positive connotation in listeners minds, this record transcend the all-ballad program-as-concept into a wash of sound, beautiful sound. Enjoy swimming in the depths of this sublime recording.