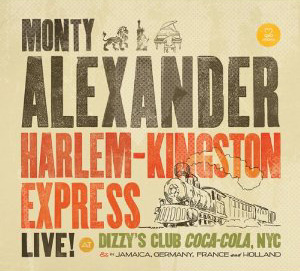 Pianist Monty Alexander has always worn his Jamaican heart on his sleeve, incorporated his country's good time music with jazz for over 50 years. With Harlem-Kingston Express: Live, his Motéma debut, , he ventures even further into reggae territory. Six of the 11 tracks were recorded in 2010 at Lincoln Center's Dizzy's Club Coca Cola Club in New York City, with this, his most "reggaefied'' group yet.

A hybrid crew is onboard, stretched out across the club's stage, with Alexander, the engine, in the middle, at piano and keyboards, pushing and pulling the Express. The rest are connected: on his left, a traditional rhythm section; on the right, four Caribbean "rock steadies."

Heavy percussion with an irresistible Jamaican beat is a given, and becomes apparent immediately on Alexander's original "Strawberry Hill," with its heavily infectious, third-beat rhythm. On Bob Marley's "The Heathen," the sound veers somewhat toward fusion, with Commander Zander's keyboard dominating.

Slowing the express during a quieter stretch, Milt Jackson's "Compassion" shows off Alexander's tender side in a solo beautifully framed by Bernard Montgomery's soulful melodica. Pushing the throttle up a notch, Marley's "No Woman No Cry" puts Alexander in a lyrical mood within a trio setting.

The Jamaican traditional, "Day O (Banana Boat Song)," made wildly popular by Harry Belafonte in the 1950s, closes out the live New York live session. Illustrating Alexander's affecting way with a crowd, he begins low-key on keyboards, but soon the folk tune evolves into a percussion free-for-all. Midway, the leader urges the crowd on in a call-response vocal where—as is the case throughout this recording, Alexander clearly has this Express completely on track.