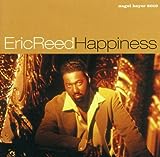 When is a big band not a big band? Perhaps the more important question is "What difference does it make?" Happiness employs an octet or nonette (depending on the cut) that sounds like a big band. It is these intermediate sized combos that have always intrigued me with their graceful passage form small combo to big band back to small combo again. This effect has been evident in the recordings of Marcus Roberts, Wes Anderson, Wycliffe Gordon, and Rodney Whitaker.

Reed stepsout and swings harder than the Marsalis allows himself to, encumbered as he is by his pedantic reverence for the music. Happiness is a full realization of the Ellington vision - extended pieces and suites, thematically related and firmly grounded in the blues. For this recording, Reed has fingered for service trombonist Wycliffe Gordon, whose beautiful obbligato on the ballad "Say Your Care" flows like pouring Mercury. Marcus Printup's muted trumpet digs deep on "Suite Sister: Fine and Brown," revealing the earthy smell of the blues. "Suite Sisters: Crazy Red" highlights the saxophone section, with altoists Wes Anderson and Julius Tolentino holding court with tenorist Wayne Escoffery pleading for mercy.

The lone standard, Ellington's "Mood Indigo" is played languidly. Reed reveals the influence of Marcus Roberts by adding a Monkian dissonance in a slow stride. Gordon takes the lead, playing perfectly. "Romantic Rag" is a throwback to Jelly Roll Morton in the piano and early Ellington in the orchestration. Reed's rhythm section is solid, as are his arrangements. Reed shines brightly in both his composition and performance. This superb recording deserves to show up in top-ten roundups at the end of the year.