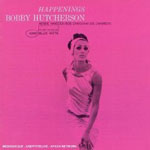 Recorded in 1966, and here with a 24-bit remaster by original engineer Rudy Van Gelder, Happenings heralded a new, less structurally adventurous approach from avant-garde standard-bearer and vibraphonist Bobby Hutcherson. As such it is, inevitably if rather unfairly—the individual performances are outstanding—less of a headline affair than the work which came before it.

Happenings is the first album to present Hutcherson as the featured soloist fronting a conventional rhythm section, instead of amongst the experimentally-inclined sextets and quintets he'd led and guested with before. These had produced, most notably, Eric Dolphy's Out To Lunch (Blue Note, 1964) and Hutcherson's own Dialogue (Blue Note, 1965), the latter featuring two new thing auteurs in pianist Andrew Hill and saxophonist Sam Rivers.

More tellingly, the choice of material on Happenings makes for a safer, more mainstream affair than its predecessors. Previously, Hutcherson had either guested with premier league composers like Dolphy, Archie Shepp and Grachan Moncur III, or—with his own bands—relied on other writers (Dialogue was almost entirely written by Hill).

Here all but one of the tunes (pianist Herbie Hancock's "Maiden Voyage") are unremarkable, in-the-tradition Hutcherson originals. With the exception of "The Omen," an ambitious, wannabe-conservatoire construction which isn't convincing, they're a competent but derivative mix of swingers, ballads and Latin tunes.

There is, however, some great playing on Happenings. Hancock's stomping, cluster-chord chromaticism on the opening "Aquarian Moon" is a highlight, as is Hutcherson's own solo on "Maiden Voyage," a track also distinguished by drummer Joe Chambers' metronomic but magically propulsive, centre-of-the-cymbal stick work. "When You Are Near," a classy ballad (though one in search of a good bridge), is arguably the strongest Hutcherson original. But at less than four minutes, it is, perversely, by far the shortest track.

A year and a half after Happenings, Hutcherson, Hancock and Chambers returned to similar territory with Oblique (Blue Note, 1967). Crucially, half the six tracks were written by Hancock and the magnificently quirky Chambers, and the music was raised several storeys as a result.

History rarely runs in an entirely straight line. In the midst of his early-1960s avant-garde endeavours, Hutcherson was a featured soloist in the sextet that recorded Grant Green's exquisitely mellifluous Idle Moments (Blue Note, 1963). Hutcherson revealed himself as a formidable mainstream lyricist, and Happenings, Oblique and much of the work that has followed can be traced back at least as far as Green's album.

Aquarian Moon; Bouquet; Rojo; Maiden Voyage; Head Start; When You Are Near; The Omen.