By SETON HAWKINS
December 5, 2005
Sign in to view read count 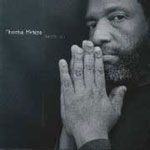 If one were to divide Themba Mkhize's career into periods, it could be split in two: the Sakhile period—his time with the now-legendary Zulu jazz/pop group; and the post-Sakhile period—solo albums on which Mkhize's own highly bop-influenced piano comes to the forefront, and the albums come across as accessible post-bop outings with strong African influences. On Hands On, a 2004 solo outing, Mkhize pays tribute to both areas of his musical interest, and the result is a fascinating, genre-defying blend of Safro jazz, Zulu a cappella, jazz-funk, and post-Coltrane jazz.

The Sakhile influence is obvious on many tracks—"Walk the Line," "Sweet Home," and "All Seasons" sound as though they came straight off of a Sakhile record (the fact that Mkhize used fellow alums Khaya Mahlangu and Fana Zulu as sidemen certainly contributes to this trend). While for the most part these tracks won't surprise anyone who has followed Mkhize or Sakhile, they are still well-performed, well-written pieces that are extremely enjoyable to hear.

However, where the album really gets interesting is on Mkhize's covers, and also on some of the originals where he rocks the Sakhile boat a bit. The covers span a broad range: a particularly laid back, slow-burning version of "Shosholoza" (aka The Song You Hear at South African Rugby Games); a gentle, loving rendition of Hugh Masekela's "Polina"; and most notably, an angular, funky take on guitar legend Phillip Tabane's "Umkobola." All of these tracks showcase Mkhize's effortlessly fluid solos on the piano—think a South African Herbie Hancock—and his remarkable use of synths for color and contrapuntal keyboard work.

More important, some of the Mkhize-composed tracks suggest an entirely new direction for him. "Izinkomo Zobaba" features Shaluza Max's powerful bass vocals set against Mkhize's piano and Rob Watson's drums. This can only be described as South Africa's answer to the John Coltrane Quartet. Watson and Mkhize lock in to create a powerful, unstoppable flow of rhythms and modal harmonies that both support and challenge Shaluza Max's growled vocals. "Peak Hour" showcases Mkhize on a hyperactively skittish organ, mixed in with atmospheric synths and percussion, resulting in a striking blend of ethereal and urgent. The only other musician who has used synths this convincingly was the late great pianist Moses Molelekwa.

Mkhize's other solos albums, like Tales from the South and Lost and Found, tend towards a gospel-flavored post-bop jazz over the jazz/pop of his earlier days. On Hands On, Mkhize seems to be reconciling and synthesizing the two. The album is a highly accessible, yet consistently interesting and creative album—a worthy contender for one of 2004's best jazz albums (even if the South African Music Awards gave that accolade to Tlale Makhene's The Ascension of the Enlightened).