By Glenn Astarita
May 7, 2013
Sign in to view read count
Track review of "Animal Collection" 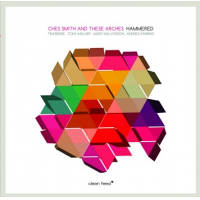 Four progressive-jazz and improvising luminaries lend their expertise for New York City-based drummer Ches Smith's foray into a multi-purposed set, exploring and splitting the frontiers of avant-garde jazz, rock and other genres into asymmetrical components. Thus far, the artist has been in the thick of things, amassing an impressive discography, performing and recording with notables such as bassist Trevor Dunn, clarinetist Ben Goldberg and others. This album merges discordant free-form impressionism, micro-melodies, off-center jazz—and with accordionist Andrea Parkins onboard—the program includes glimpses of a carnival-like environment.

Smith's cunning musicality is radiantly disseminated on "Animal Collection." Here, the ensemble delves into odd-metered cadences, accelerated by a few pithy detours and unforeseen shifts in direction. But as the piece develops the band morph a succint melody and contrapuntal mechanisms into a howling incursion, sparked by the dual sax attack of Tony Malaby and Tim Berne.

Guitarist Mary Halvorson's humbly crafted notes and Parkins' understated voicings help define a parallel that contrasts simplicity with knotty digressions and an oddball melody, as Smith leads the charge via his solid rock beats and rumbling polyrhythmic flurries. Moving forward, the musicians intersperse a bit of social chaos with a total breakdown during the bridge and settle into a straightforward groove, leading to the garrulous closeout. On the basis of this outing and session work for others, Smith reveals a fertile imagination that complements his proficient technical faculties. No telling where he'll go from here.

Frisner; Wilson Phillip; Dead Battery; Hammered; Limitations; Learned From Jamie Stewart; Animal Collection; This Might Be A Fade Out.