By John Kelman
December 1, 2011
Sign in to view read count

Amidst a nation of musicians who fearlessly and seamlessly find ways to marry music and technology on the most human of terms, Håkon Kornstad still stands alone. Armed with an array of saxophones, flutes and weird hybrids like the flutonette (a clarinet mouthpiece on a flute body)—and a vintage looping device that may be limited compared to newer ones on the market, but is so intimately familiar to Kornstad that it's become an organic extension of his musical mind—the Norwegian improviser has been carving an unparalleled space for himself in the realm of real-time solo music. Jazzland Community (Jazzland, 2007)—documenting a tour featuring a number of artists from keyboardist Bugge Wesseltoft's Jazzland label both solo and in various permutations and combination—first hinted at the ground the Wibutee alum was breaking, while Single Engine (Jazzland, 2007), released just a few months later, was a proper declaration of Kornstad's intent.

But it wasn't until 2009's Dwell Time (Jazzland) that Kornstad's vision was fully realized, on his first entirely solo recording (Single Engine included a handful of guests), recorded live over two cold nights in the winter of 2009, with no overdubs and minimal post-production editing. The stunning cinematics of Dwell Time—with Kornstad not only perfecting his ability to create multiple looped layers, bringing them in and out of the real-time performance in ways that imposed instantaneous form, but also honing extended saxophone techniques like consonant multiphonics—made it a sure pick for best of that year by more than one international journalist. It's a tough act to follow, and if Symphonies In My Head is a little less intrinsically earth-shattering because, to some extent, it has been done before, it's no less compelling, as Kornstad hones his approach even further on eight more spontaneous compositions recorded a little over a year later at the same Sofienberg kirke (church) in downtown Oslo, a room whose natural reverb applies its own distinctive signature to both recordings.

Given that Kornstad is predisposed to creating looped melodies that, often vertically harmonized, create their own hypnotic pulses, it's too easy to draw comparisons to the minimalism of Steve Reich, Terry Riley and Philip Glass, but there's a fundamental difference: in almost all cases, these heralded classical artists create their interlocking works built on repetition and gradual evolution either as formal composition or, in the case of Riley's classic In C (Columbia, 1968), with a larger cast of musicians whose individual choices make each performance distinct unto itself. Kornstad, on the other hand, operates completely alone, with little in the way of preconception—the only piece here that has any basis in existing form being the opening "Pearlfisher," based on a Bizet aria. 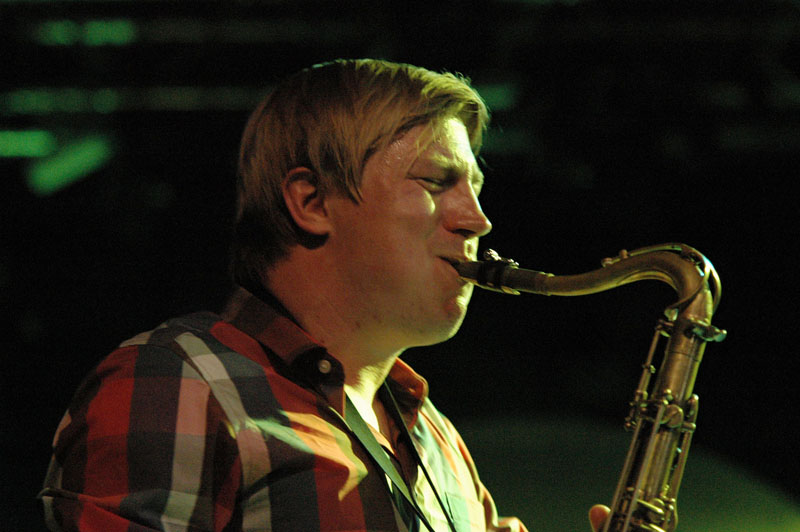 What differentiates Symphonies—and makes it a fitting evolution over Dwell Time—is its greater reliance on pulse and largely more detailed layering. Whether it's the tongue-popped bass saxophone of the Middle Eastern-tinged "Damascus," the more ethereal "Sansula," where Kornstad's flutonette hovers over the titular instrument (an African thumb piano mounted on a small drum), the consonant multiphonics of "Pearlfisher," or Aire," where Kornstad creates an orchestral centerpiece whose harmonies ebb and flow with unfailingly lyricism, Symphonies In My Head lives up to its title across 47 minutes of music that's all the more astounding for its in-the-moment creation.

In addition to expanding his sonic palette with the sansula, Kornstad whistles and creates an undercurrent of rich tenor vocals towards the end of the closing "Plystre," and it's a particularly significant move, as the saxophonist is in the midst of studies to become an opera singer, the confluence of a number of factors over the past couple years that speak even further to his unrelenting desire to follow his muse wherever it takes him.

Kornstad is, in fact, already gaining a reputation as an opera singer in his own country, and while he will remain largely focused on his studies through 2012, it should come as no surprise that he's already considering how to incorporate this unexpected detour into his existing solo endeavors. As other artists expand their horizons by collaborating with other players—and he certainly continues to work with others, like his duo with singer Sidsel Endresen, and his trio with Icelandic bassist Skúli Sverisson and American drummer John Hollenbeck at the 2010 Kongsberg Jazz Festival—there's no doubt that Kornstad will continue both the logical progressions and unexpected deviations of his forward-thinking solitary pursuits.