By Troy Collins
December 1, 2011
Sign in to view read count 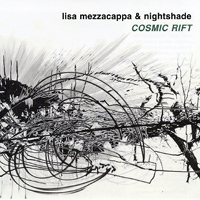 Since relocating to San Francisco ten years ago, Staten Island-born bassist Lisa Mezzacappa has established herself as a commanding presence in the vibrant West Coast scene. Mezzacappa's pliant bass lines have provided a stalwart foundation for some of the Bay Area's most dynamic projects, ranging from the visceral excursions of her riotous garage jazz band Bait & Switch to her collaborative efforts in the bold collective quartet Cylinder. Cosmic Rift, the debut of Mezzacappa's neo-classical quintet Nightshade, showcases a more restrained side of her artistry, reveling in the moody ambience implied by the ensemble's name.

The electro-acoustic lineup includes clarinetist Cory Wright, guitarist John Finkbeiner, vibraphonist/percussionist Kjell Nordeson, and electronics manipulator Tim Perkis, whose subtle contributions imbue the band's chamber music-like instrumentation with kaleidoscopic color. The group's genesis can be traced to 2009, when Mezzacappa was invited by the Yerba Buena Center for the Arts in San Francisco to develop new pieces inspired by the work of visual artists Yehudit Sasportas and Edgar Arceneaux. Mezzacappa's atmospheric originals and stately arrangements of unorthodox covers evoke the cinematic air of the artists' implied visual narratives, as illustrated by the album jacket, which features Sasportas' abstract chiaroscuro ink drawing Cosmic Rift No.38.