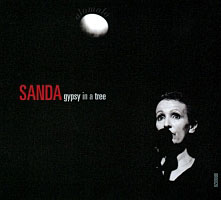 Anyone who has lived the myriad lives of the Diaspora as Sanda Weigl has, is qualified to speak for the generations of pain and joy, torture and triumph of human life that has come to pass for her people, and the Gypsies as well. Fleeing the repressive regime of Romania and falling afoul of the even more dictatorial post-war East Germany, she was jailed, gagged and just about forced to live the Gypsy life herself, until she left Europe altogether. Impossibly heartbroken at one stage, she was, however, steeped in the mystery and magic of Romani. In New York of the 1990s, she began to flower again, singing her heart out about love and loss, repression and freedom. This extraordinary musician has found herself once more on Gypsy in a Tree, an album of exceeding beauty, whose metaphor references the "invisible" gypsy, ensconced in a tree out of sight at weddings he or she was forced to serenade provided they were unseen, yet heard.

With a voice distilled from a heavenly choir, her delicious contralto quivers with fortuitous tremolo as she conjures visions of the beautiful and the damned. History and life is so real, it is almost touch sensitive; the hot breath of her phrases and lines of pain are so shrill they pierce the heart like a million darts. Sanda's vocal gymnastics are as deep as the soul, and yet burn like tears streaming down cheeks, taut and afire with hurt. "As Ofta Sa-Mi Iasa Focul" is a love song, poured like that liquid fire down the throat of lovers, not only by the lyrics expounded but by a voice that heats up like an unbridled flame. On "Toderel" she sings of the sunset of life with a naked fear and elemental sadness, still recalling the pride of youthful prowess, as Dersu Uzala voiced in Akira Kurosawa's film of the same name. Mere mortals do not sound this perceptive: vocal visionaries do, and Sanda is certainly one, like the great Colombian chanteuse, Lucia Pulido, Persian singer Sussan Deyhim, or Ethiopia's Ejigayehu, "Gigi" Shibabaw.

This is music of unsurpassed beauty, manifest not only in the lyric that is expressed, but also in what is not sung: the profound emotions that become the heartstrings that Weigl plays with her subtle accents and in the myriad tones of the soul's stirring. Her harmony is in the subtle balancing of tensions and in the resolution or dénouement of her narratives. Both the elasticity as well as the sometime brittle emotions are the guided by the deceptive simplicity of the music, which becomes the guiding thread of her elevated song. Bassist Stomu Takeishi and his twin, the itinerant percussionist Satoshi Takeishi make exquisite contributions throughout, as do pianist Shoko Nagai, tuba player, Ben Stapp and the beautiful moaning of Douglas Wieselman on clarinet. Despite the inscrutable lyricism and foreignness of the Romanian, the music of this album remains one of the most monumental achievements in recent memory.