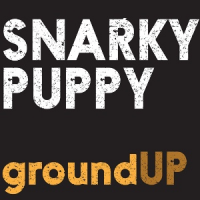 With all of the press about economic woes, meteorological catastrophes, sleazy politics, and other calamities, the news can be overwhelmingly depressing. But artists have always found an outlet for transcending the blues through music. Enter Snarky Puppy to add some relief; a collective with over 25 players in regular rotation from Dallas and New York City, bringing a rotund sound of heady jazz, infectious funk and world music influences. One thing that resonates is the collective's ability to hold the groove line, as they say: "Music to move the brain and booty."

The key to the group's sound is found in its core members, who have performed with a who's who list of names: Snoop Dogg, Kirk Franklin, Kenny Garrett and YoYo Ma, to name a few. But it's the cohesive arrangements, strong playing, and approachability that have earned Snark Puppy's recognition. Recorded live in the front of a studio audience groundUP is the band's fourth release.

The music leaves a subtle imprint of diverse influences, with hues of Africa and cranked hip hop in "Binky," mixed with brass and synthesizers, or a Southern hard rock anthem with Derek Trucks-style slide guitar in "Minjor." The level of musicianship allows the group to shift gears in "Young Stuff," moving from swinging vamps and electronics to a slow stewed beat with a very funky electric solo reminiscent of polish violinist Michal Urbaniak.

While the pop glam of "Like A Light" shows the collective's sophistication, tunes such as the neo-soul of "Young Stuff" linger all the more with its slow jam tempo at the halfway mark with an expressive bass solo. The band doesn't mind getting dirty either, especially on "Quarter Master" which does New Orleans proud with horn shouts and raucous piano runs. The tightest track on groundUP is without a doubt "Bent Nails," with its smoking guitar riff, Tower of Power horns and a funky break that would make the Godfather of Soul, James Brown, smile.