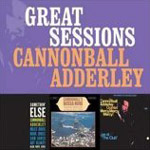 A less cohesive and chronologically compact collection than the others in Blue Note/Capitol's new budget priced Great Sessions series, Cannonball Adderley's set offers a potpourri of three albums recorded for Blue Note, Riverside and Capitol between 1958 and 1966, charting the saxophonist's trajectory from blues-drenched Charlie Parker disciple to soul-jazz pioneer.

The cream in the coffee, of course, is Somethin' Else, recorded for Blue Note in 1958 and here in its RVG remaster edition. The greatest of Adderley's early albums, it's also something of a Miles Davis recording under another name. (Adderley had been a member of Davis' band since 1957 and played on Milestones, and on Somethin' Else Davis returns the favour.) Davis wrote the title track, states most of the themes, and solos on all tunes except the hot-ballad saxophone showcase "Dancing In The Dark."

Much of the music, and in particular the "Freddie Freeloader"-ish "Somethin' Else," sounds like a rehearsal for 1959's Kind Of Blue, and the two albums sit comfortably next to each other. Adderley straddles the bop/blues nexus with customary ease, and Davis uncustomarily loosens his stays. (The Hank Jones-penned bonus track "Bangoon," a tune ripped almost wholesale out of the Tadd Dameron songbook, contains a memorably open, and openhearted, trumpet solo.)

Canonball's Bossa Nova, recorded for Riverside in 1962, is a less successful set, teaming Adderley with Sergio Mendes' unspectacular Bossa Rio Sextet, which was visiting New York at the time. Adderley is simply too hot and too funky a player to slot into the soft and subtle bossa groove, and his throaty vocalisations sound out of place.

With Mercy, Mercy, Mercy, recorded for Capitol in 1966, we're back on the good foot again. The album was recorded in front of an invited studio audience in Los Angeles (and not, as the obfuscating title and original liner notes suggest, at The Club, a shortlived Chicago venture opened by a radio DJ acquaintance of Adderley). By the mid-'60s, Adderley was sitting solidly in a soul-jazz groove, and every track on the album burns furiously. Joe Zawinul's brilliantly cathartic "Mercy, Mercy, Mercy"—surely one of the funkiest slow-drags ever written, and a master class in the use of tension and release—and Adderley's own roaring blues bopper "Sticks" are standouts, but there isn't a single dud on the album. The David Axelrod-produced sound isn't the greatest, but you can always hit the volume button. A steaming, down-home stew.