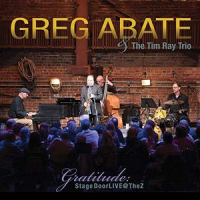 If somehow you haven't yet heard saxophonist Greg Abate (pronounced Uh-BAH-tay), now in his seventh decade and as sharp and eloquent an orator as ever, it is high time you did. The Rhode Island native is an earnest post-bopper from the Phil Woods / Bud Shank school of straight-on swinging, and Gratitude, Abate's fourth album with the admirable Tim Ray Trio, happens upon the ensemble in blue-chip form in a lively concert recorded on the cozy stage of the Zeiterion Theater in New Bedford, Massachusetts.

While Abate is best known to fans in New England and around the world as an alto specialist, he underlines his versatility on Gratitude by switching to tenor on three selections, flute on two others and baritone on the flag-waving "Into the Stratosphere," one of eight of his original compositions on the engaging program. Completing the bill of fare are Roland Kirk's seductive "Serenade to a Cuckoo" (played on tenor, not flute), Joe Henderson's sinuous "Inner Urge" and the trio's intrepid ten-minute-long rendition of Fats Waller's quirky "Jitterbug Waltz." Abate's alto is in full flight on the Latin-leaning "Gratitude," the fast-moving anthem "Bop Lives," the free-wheeling "Dracula" and warm and lyrical "Farewell Phil Woods" (complete with acrobatic solo coda), his flute on two more original themes, "Hazy Moon" and "Gemini." Besides "Cuckoo," Abate's tenor is front and center on "Inner Urge" and his own warm-hearted ballad, "For the Love of Life."

Ray is a resourceful soloist and superb accompanist, as are bassist John Lockwood and drummer Mark Walker who know immediately where Abate is heading at any given moment and never let him land there on his own. As for the leader, he swings robustly and often, clearly unconcerned about exploring new territory but maneuvering remarkably well within the customary framework established by his predecessors and peers. In other words, this is high-quality small-group jazz, as well-designed and deftly performed as any you are likely to hear these days.