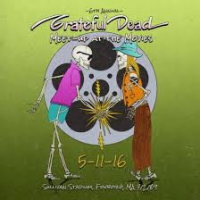 The sixth annual Grateful Dead Meet Up at the Movies constitutes the third 're-run' of a sort within the series. The previous five yearly film showings of the iconic band traversed their fifty-year history, finding them in locales as divergent as a German television studio, the grounds of Ken Kesey's creamery in rustic Oregon and a regular stopover for the band in Alpine Valley, Wisconsin (twice). This year's event is, in fact, the third installment from the 1989 summer tour, this one from Sullivan Stadium outside of Boston, another one of the Dead's favorite stomping grounds (their regular extended runs at Boston Garden the stuff of legend, at least within the band's community).

Given the quality of the content, though, it matters little if the repeats represent a paucity in the archives or simply a desire on the part of the Dead organization to present a reliably satisfying experience for the fans. In the Vermont venue, South Burlington's Palace 9, two theaters showed the film, one offering the amenity of beer for sale, but the other dry room populated with approximately fifty people (roughly four times as many as the first such event in 2011) erupted in regular rounds of applause throughout the approximately three hour running time.

All of which was deserved for both the production values of the film and the Grateful Dead's own performance (though perhaps not so much for merchandising of an archival title and concert footage of Dead @ Company, which elicited barely any recognition). Skillful and creative camera work followed the flow of the music with no discernibly predictable rotation of shots. Rather, frequent closeups of Jerry Garcia as he soloed alternated with aerial view of Brent Mydland surrounded by his keyboards, while a shot across the stage caught the latter two, plus Bob Weir and Phil Lesh as they all sang together (fully in tune and with gusto). The audio quality was as crystalline in its purity as the video, making it easy to single out the individual instrument(alist) at any given time. The sole exception might've been during the "Drums" segment when static closeups of Mickey Hart's exotic percussion rig mirrored a muddy mix and left out partner Bill Kreutzmann altogether.

Which is more than a little ironic as the two drummers were key to the stellar playing of the sextet. Not that the Dead, at this point in their career, was anything less than the sum of its parts, with most of the extended improvisation left for the "Space" segment in the second set, just before the band ratcheted up the pace toward the close of the show. But the fluency of Kreutzmann and Hart was as much or more crucial to the success of latter-day Dead concerts than Garcia's level of engagement; here the titular leader of the group was smiling constantly and moving freely while playing and singing emotively, while the rhythm devils generally swung with syncopated glee, driving the band when necessary, as on the close of "Cassidy," and knowing when less was more, on the subdued "To Lay Me Down."

The stylization of Grateful Dead concerts at this time lent itself to such a film presentation. While the group didn't take many chances, apart from the bravely expansive opening triptych of "Playing in the Band">"Crazy Fingers">"Wang Dang Doodle," the sequencing of songs promoted real momentum through a similar mix or familiar originals like "Truckin'" and "Sugar Magnolia" and astute cover choices including Bob Dylan's "Queen Jane Approximately" and "The Mighty Quinn (Quinn the Eskimo)," Traffic's "Dear Mr. Fantasy" plus a closing snippet of The Beatles' "Hey Jude."

The setlist might well have been designed specifically to suit video presentation, but if so it worked equally well on the musical front, as much so as the aforementioned counterpart from July 19 in Wisconsin—where there were no selections repeated except for the de rigeur 'Drums"/"Space" intervals. How much longer these Grateful Dead community reunions continue is anyone's guess, but these "Meet Ups at the Movies" are a most distinctive entry on the eclectic Fathom Event's roster, so even if not every one is as distinctive as Sunshine Daydream in 2013, it's almost a moot point with each one as fulfilling as the other(s), including the last two years.