His genius has been not merely to bolt colourful ethnic exoticisms onto the exterior bodywork of the jazz tradition...but to create a truly syncretic blend in which it is impossible to say where one culture stops and another starts

Billed, irresistibly, as 'World Musicians United In A Journey Through Bhangra, Babylon & The Blues,' these two performances (on 23 & 24 October) by the 19-piece world-jazz Grand Union Orchestra promised much, and delivered it all - including the London premiere of the band's most recent major work, the impassioned raga-based suite If Paradise... , inspired by recent history in the Middle East.

Little known outside British jazz circles, GUO was formed by the visionary composer and pianist Tony Haynes in 1982, long before the term world-jazz had been coined, as a vehicle for jazz-based, cross-cultural musical (and mystical) experiment. His genius has been not merely to bolt colourful ethnic exoticisms onto the exterior bodywork of the jazz tradition, as so many so-called global 'fusions' limit themselves to, but to start from the deepest rhythmic and harmonic foundations of his music to create a truly syncretic blend in which it is impossible to say where one culture stops and another one starts - or of which it is meaningless, anyway, to try.

Haynes is without question as important a figure in the development of British jazz as his more celebrated immediate composer/bandleader predecessors Neil Ardley, Michael Garrick and Mike Westbrook. But because his work is so profoundly and idiosyncratically cross-cultural he has been hard to slot into the jazz world's usual pigeonholes and he has tended to fall between the cracks when it comes to industry and media attention. If Paradise... , for instance, was first performed in 2002 and has taken this long to get to London. GUO is a relatively expensive project to stage and without public subsidy it is likely performances would be even more infrequent. (The BBC, it should be noted, has to its credit broadcast four full-length performances by the orchestra since 1997, on is art music station Radio 3).

Most of Haynes' in-the-tradition musicians - all key players on the British jazz scene - make their livings doing sessions and leading their own bands, coming back together again for each new GUO project, and the core of the line-up has been remarkably stable over the years. Expatriate South African trumpeter Claude Deppa, an incendiary presence in London since the late '70s, has been a member since day one, and several others, including the outstanding Australian saxophonist Louise Elliott, leader of the African-inspired Jazzhearts, have been in the band almost as long. Drummer Brian Abrahams, another expatriate South African, is in his own words 'a relative newcomer' after only 10 years.

The band also attracts a steady stream of new talent. The sax section currently includes emergent stars Jason Yarde, musical director of the genre busting street-music-meets-improv Future Sounds Of Jazz (wanted for questioning by Britain's jazz police), on alto and soprano, and Ingrid Laubrock, a founder member of the Brazilian-jazz quartet As Meninas, from Germany, on alto and baritone. To a man, and a woman, the orchestra is a collection of singular and innovative sylists, united by a shared belief in the transforming power of music.

Alongside its polyglot and ethnically diverse jazz core, GUO features a rolling cast of musicians from outside the jazz tradition. Recent works have included players from Turkey, China, Portugese-speaking Africa, South America, India and the Caribbean. For If Paradise... Haynes has foregrounded GUO regulars Lucy Rahman and Akash Sultan, two angel-voiced Bangladeshi classical/folk singers, who sing mostly in the languages of the region, along with the wonderfully gifted Yousouf Ali Khan, also from Bangladesh, on tabla and dholak, and Baluji Shrivastav, from India, on sitar and dilruba. (Blind, wearing shades and an immaculately tailored silk Sgt Pepper tunic, Shrivastav is incidentally the Nattiest Man in the Band). 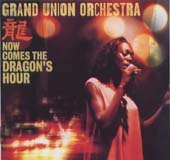 Although GUO has appeared on such major London stages as Sadler's Wells Theatre and Queen Elizabeth Hall, these performances were given at LSO St Luke's, an elegantly converted 18th century church on the northern border of the City, seating about 400. Architecturally distinguished, with a soaring high ceiling, the space retains some of its former mystical atmosphere, and is a perfect setting in which to hear Haynes' glorious and inspirational music.

If Paradise... , which took up the second half of each performance, is a continuous, 70 minute suite in seven sections. Lyrically - as related by vocalists Lucy Rahman, Davina Wright, Richard Scott and Akash Sultan - it is deeply rooted in recent events in Afghanistan, Pakistan and Iraq. Central to its story is a young Asian couple caught up in the horrors of the warring world around them. The libretto doesn't take sides between followers of Islam or the Jewish-Christian tradition, instead it questions the moral certainties of all politicians and militarists who stir up conflict created by religious dogma and fundamentalism. Some of the sung passages ("Song Of Separation", "Collateral Damage") relate the stuff of nightmares. Others are breathtakingly beautiful.

Musically, many of the melodic and harmonic features of the suite are based on two classical ragas, Aheer Bhairav and Ahiri Todi, simplified for the Bhangra passages, and of course radically deconstructed and cross-pollinated with the jazz and blues traditions. Classical Indo-Pak time cycles are also woven into the jazz pulse.

For If Paradise... Haynes has 19 musicians playing 35 instruments (see The Line-Up below for details) in a wide variety of combinations, and he employs the full spectrum of onstage groupings from trios and quartets through to the complete band. The result is resplendent kaleidoscope of sonorities and textures. It is almost invidious to pull out particular performers for special mention, as practically every band member gets to solo with style during the performances, but saxophonists Yarde, Laubrock and Elliott, trumpeters Deppa and Kevin Robinson, trombonist Fayyaz Virji, sitarist Shrivastav and guitarist Gerry Hunt were especially memorable. 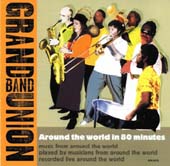 As a composer/arranger, Haynes is as comfortable with quieter, more intimate settings as he is with the turbo-charged complete line-up in full-on blues 'n' bhangra mode. Two largely traditional Bangladeshi songs sung by Rahman and Sultan, with blues-inflected tenor sax and flute counterpoints from Elliott, were haunting and exquisite almost beyond words, and among the most special highlights of the evenings.

Ultimately, If Paradise... celebrates those noble instincts common to all humanity, regardless of race or religion, and our capacity for love and survival in the direst circumstances - and it was clear over this weekend at LSO St Luke's that most audience members felt somehow cleansed, uplifted and spiritually refreshed by the listening experience.

In conclusion: Two of London's most ambitious and successful jazz concerts of the year. No question.

Visit Grand Union Orchestra on the web at www.grandunion.org.uk .