By STEPHEN LATESSA
October 8, 2005
Sign in to view read count 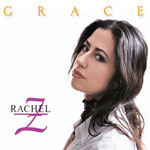 This should have been easy to avoid. During the recording or planning sessions for Grace, Rachel Z's first vocal album, someone should have had the courage to tell her that she just doesn't sing very well. She has tried many different things over the years, to varying degrees of success, so perhaps she figured that singing would be a nice change of pace. Unfortunately her vocals are a fatal flaw from which the album cannot recover.

It is not so much that it is a bad voice, although it is certainly undistinguished and curiously weak at points—especially considering that she mentions in the liner notes that she had originally planned to be an opera singer. The fault lies more in the manner in which she employs her voice. Indeed, she attacks each vocal performance with all of the worst tics and traits of Kate Bush, Tori Amos, and Joni Mitchell front and center, while also throwing in some unique nasal touches in passing. The endlessly repeated rap on "Pain is, however, probably the nadir of the album.

It is certainly ironic that the album credits her only with vocals when her piano playing with her trio of Bobbie Rae (drums and percussion) and Chris J. Luard (bass) is easily the highpoint of the album. Their performance of U2's "One is definitely a track to build on. Eschewing the anthemic reach of the original, the band offers an introverted performance with Rae's rolling, muffled drums sounding particularly evocative. Not surprisingly, this is also one of the few tracks that do not feature vocals.

Ultimately, Grace is the result of a massive miscalculation that doomed the album from the start. Rachel Z is a talented pianist who can summon moments of real interest with her band, but Grace does not show her to be an effective singer or lyricist.

Protect This Child; Moon In Your Hair; One; Grace; Pain; Come As You Are; This Woman's Work; Riot; Joga; Imagine.