By Larry Taylor
February 12, 2013
Sign in to view read count 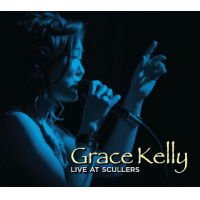 Grace Kelly is indeed a prodigy on alto sax, having made her first recording at 12. Two years ago, at 18, her sixth album was released The Man with the Hat (Pazz Productions), a collaboration with the renowned Phil Woods on alto.

That CD turned up the spotlight on her genius, bringing her increased attention. She shined in duets with Woods and had ample space to stretch in solos, playing mostly standards. She also adequately sang two songs. On Grace Kelly: Live at Scullers, she takes another tack—all but three sides are vocals and all but two are originals, both instrumentals on standards. Her alto performance here is quality, but her singing is a mixed bag, veering into the realm of pop. This direction is understandable, given that she has reportedly signed with a smooth jazz label. The band itself is a crackerjack sextet, given added flavor by bringing in ukulele and cello.

The first two numbers have a country/western feel. In "Please Don't Box Me In," she effects a too-shrill yodel-wail, an effect emphasized by the twang of guitar. On alto, though, she comes off fine in this, especially in a soaring blend with the trumpet.

And she does good on a couple compositions; for example, on the country-tinged ballad "Kiss Away Your Tears," with lovely guitar backing, followed by the charming "Falling." The latter features a child-like quality, accentuated by the ukulele and cello. The audience joins the fun, making for a songfest.

The two instrumentals on standards are highlights. "The Way You Look Tonight" starts with straight-ahead solos on alto and trumpet, which soon become a duo, giving way to separate cadenzas at the end. Very tasty. An unconventional, roof-raising "Summertime," closes the set. It is led off by a rousing foray of drums, then the synthesizer enters with horns shortly behind. A bit of theme is played, the guitar solos and shortly a pleasing cacophony emerges with all jumping in and out and Kelly's verbal shout directing the party. The audience loved it.

This recording brings up a wonderment regarding this young artist's career path. How to balance playing and singing? That's the question.