Gov’t Mule, The Avett Brothers and Magpie Salute At The Northwell Health at Jones Beach Theater 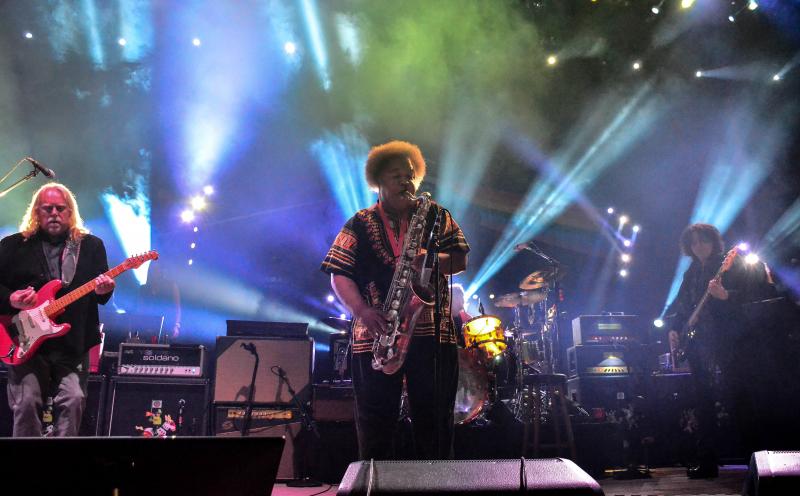 Gov't Mule is a southern rock influenced jam band, formed in 1994 bu Warren Haynes and Allen Woody, as a side project to what, at the time was their main gigs as lead guitarist and bassist for the Allman Brothers Band. After releasing its debut album, Gov't Mule, in 1995 on Relativity Records, the band has released numerous studio albums and EPs and quite a few live releases. During the past twenty-plus years, Gov't Mule has toured relentlessly and played at many music festivals across the world. The band's sound melds southern rock, funk, blues, soul, Americana and psychedelic rock with a jamband aesthetic to create a one of a kind sound. The band is currently comprised of Haynes (lead guitar and vocals, Matt Abts (drums and vocals), Danny Louis (keyboards, guitar, trumpet and vocals) and Jorgen Carlsson (bass). Diehard fans refer to Gov't Mule as "Mule."

The Avett Brothers are a band whose music is best defined as a gumbo of Americana featuring elements of folk, pop, rock, blues, country and bluegrass. The band hails from Mount Pleasant, NC. During the course of its career, the Avett Brothers have been nominated for three Academy Awards and have been nominated for eight Americana Music Honors & Awards trophies. It has won four times. Its ninth studio album True Sadness (American Recordings) was released in 2016. The album was nominated for Best Americana Album at the 59th Annual Grammy Awards. The May It Last: A Portrait of the Avett Brothers documentary, about the making of the album, directed by Judd Apatow and Michael Bonfiglio, was released to critical and popular acclaim in 2017. The group is made up of two brothers, Scott Avett (banjo, lead vocals, guitar, piano and kick-drum) and Seth Avett (guitar, lead vocals, piano and hi-hat), Bob Crawford (double bass, electric bass, violin and backing vocals) and Joe Kwon (cello and backing vocals). Mike Marsh (drums) and Tania Elizabeth (violin and backing vocals) are touring members.

The Magpie Salute rose from the ashes of the Black Crowes. The band is led by guitarist Rich Robinson and includes former Black Crowes members Marc Ford (guitar) and Sven Pipien (bass). John Hogg handles the lead vocals and the group is rounded out by Matt Slocum on keyboards and Joe Magistro on drums. The band's debut CD High Water 1 will be released later in 2018 by Eagle Rock Entertainment. The band's musical style is the natural progression and continuation of the Black Crowes' psychedelic blues, southern rock, soulful retro sound with powerful riffs and a rock 'n' roll swagger.

On a warm mid-July evening, the three bands touched down at Long Island's Northwell Health at Jones Beach Theater. Though the tide in the bay was rising, the audience inside the intimate outdoor venue could not have cared less. They were excited by what they were about to hear—an evening of powerful rock, soul and of course, Americana.

First up was the Magpie Salute. The six member band hit the stage promptly at 6:30pm and got the joint rockin.' Toward the end of the set, Robinson stepped up to the mic and stated that the group was "a new band of old guys." Then he laughed and said, "We're actually in our twenties. We just live hard!" The band's short half-hour set was highlighted by the Blind Faith cover "Had to Cry Today," and the new song "High Water." Surprisingly, there was not one Black Crowes song in the set. This is a band that wants to make its way on its own merits. Judging from the powerful performance, it will.

Following a short intermission, the Avett Brothers appeared on stage. Opening with the traditional song 'Rock The Cradle Lucy," the band had the audience in the palms of its collective hands from the start. The fans immediately jumped to their feet to dance and were singing along with the brothers and other band members on "Die Die Die," the raucous version of "Satan Pulls the Strings," "Live And Die" and "Laundry Room."

On the instrumental "Old Joe Clark," Bob Crawford took his moment in the spotlight when he delivered a tasty bass solo. During "Ain't No Man," as Seth Avett sang, he ventured into the audience and shook hands and gave the audience members in the orchestra pit real a treat.

As the sun began to set, and the glow of what photographers call "the magic hour" began to engulf the arena, the band closed out its electrifying set with "Talk On Indolence," "Living of Love," "Orion's Belt," "Down With the Shine," "Head Full of Doubt/Road Full of Promise," the beautiful "I and Love and You" and a thought-provoking, cathartic version of "No Hard Feelings."

After another intermission, it was time for the Dark Side Of The Mule tribute to the legendary music of Pink Floyd—the Warren Haynes & Company version. Gov't Mule opened its set by working its fans into a frenzy with a pair of non-Pink Floyd tracks—"Mule," and "Revolution Come, Revolution Go."

The remainder of the evening was Haynes and his cohorts' versions of timeless Pink Floyd tunes. For this tour de force performance the band was joined by saxophonist Ron Holloway, multi-instrumentalist Torbjörn "T-Bone" Andersson and vocalists Machan Taylor, Mini Carlsson and Sophia Ramos.

On this evening, the performance included: the Pink Floyd classics "Shine On You Crazy Diamond (Parts I-V)," "Have A Cigar" and Side 1 of The Dark Side of The Moon album—"Speak to Me," "Breathe" and "On the Run." Scott and Seth Avett joined Mule on "Time" and "Breathe Reprise." The evening's version of Side 1 of the fabled record ended with "The Great Gig in the Sky."

Marc Ford and John Hogg from Magpie Salute joined the band for "The Nile Song." The evening continued with Side 2 of The Dark Side of The Moon. When the audience heard the jingling of coins and the cash register, the opening sound effects of "Money," the venue was literally rocking. Because the tide had risen over onto certain areas of the theater's main pit area, it was also complimented with small three to six inch rolling waves. The audience members did not care. Mule's perfect album concert continued with "Us and Them" and "Any Colour You Like." The main set concluded with an amazing version of "Comfortably Numb" featuring Rich Robinson.

The band members then took their bows and headed backstage to towel off, grab a quick drink and catch their breath. Within minutes, the musicians had returned to deliver an amazing version of "Wish You Were Here" that would have done Roger Waters, David Gilmour, Nick Mason and Richard Wright proud.