By FLORENCE WETZEL
July 7, 2011
Sign in to view read count 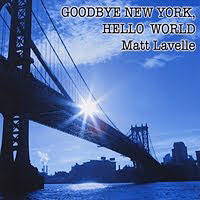 Multi-instrumentalist Matt Lavelle's CD is entitled Goodbye New York, Hello World—and he means it. Since 1999, Lavelle has been a vital part of the New York City avant-garde jazz scene: in addition to electrifying live performances and impressive CD releases, he has also been a thoughtful commentator on the music world, including blogs, Facebook posts, and a memoir-in-progress that's creating a buzz both online and off. These days, Lavelle's music and life have been taking him increasingly to Europe—including an upcoming trip to Sweden, his first European tour as a leader—and Lavelle finds himself at a crossroads: is it still possible to make a life and a living as a jazz musician in New York City, or does the action now lie elsewhere?

Goodbye New York, Hello World ponders these questions and more. Lavelle is a great storyteller, and each song is an original composition that documents his journey. He covers an astonishing spectrum of emotions in these seven tunes, aided by his facility on a wide range of instruments: cornet, flugelhorn, alto clarinet, and bass clarinet. As J.R.R. Tolkein made clear with The Lord of the Rings, good traveling companions are essential, and Lavelle is accompanied every step of the way by three musical blood brothers: tenor saxophonist Ras Moshe; bassist Francois Grillot; and drummer Bob Hubbard.

Tunes such as "Choices" and "Endings and Beginnings" address Lavelle's questions straight on, offering no-holds-barred access to a human heart in flux. But there's also the beautiful "Mi Manchi" ("I miss you" in Italian), an elegant meditation on longing that's subtle and private. The CD's ground zero is "Your the Tonic," an 18-minute song without a single wasted breath. Lavelle's previous recordings are uniformly excellent, but here he breaks new ground. The heart of the song is Lavelle's relationship with legendary saxophonist and musical pioneer Ornette Coleman, with whom Lavelle studied formally from 2005 to 2009. "Your the Tonic" possesses some of the most urgent, intimate music on record, with such intensely propulsive swing it feels like the CD is going to burst out of the boom box. Lavelle releases his soul with primal cries of ferocious passion, leaping fearlessly through the door opened for him by Coleman. The tune's honesty, humanity, and keen intelligence are truly breathtaking, and not to be missed.

In recent decades, New York—once such a welcoming haven for jazz musicians in terms of cost of living and range of venues—has become a tough place to survive. And yet, by virtue of his tenacity and musical mission, Lavelle has done just that, receiving an education that has included priceless contact with luminaries such as Coleman, multi-instrumentalist Giuseppi Logan and bassist William Parker. Whatever Lavelle's next step might be, let's hope he continues his generous sharing, much to the benefit of jazz lovers in New York City and beyond.