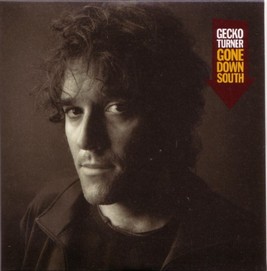 Gecko Turner is a globe-trotting Spanish musician and singer with a particular sweet spot for all the different aspects of American R&B and soul. While composing, arranging, and performing (on guitar, keyboards, percussion and more), Turner demonstrates a light and natural touch for mixing different soul and R&B styles—mostly from the US, but some from Latin and South America—together into organically creative new combinations. While singing, Turner rarely raises his throaty, husky yet light voice, and often purrs and meows as much as he sings, overpowering with subtlety. It's easy to suspect that he's also a master maestro with the ladies.

Recorded at various stops in California, Texas, London, Madrid and Extremadura, the uproariously lascivious and funky Gone Down South consolidates and advances Turner's intercontinental soul. Slippery and sparkly, "Tea Time" dances on Latin and American and African rhythms loosely strung together by an electric eel of rhythm guitar and a funk bass line (and also features a rapper from Extremadura, Isayah Thomas). Then this coolly refreshing "Tea Time" pours into the scalding "Amame, Mimame," where a single piano chord pounds out liberating, two-fisted soul that rocks in tandem with blues harmonica, Afro-Cuban percussion and a Dionysian African chorus that just won't stop chanting its title. On top of all this instrumental heat, Turner's laconic and drawling vocal sounds even cooler.

"The Love Monk" digitally paints a more modern club soundtrack, cutting beats and horn solos in and out of its thick and steamy electronic jungle mix, and jumps quickly into "When I Woke Up," which skates along icy clavinet and frosty trumpet. When you hear Turner deliver the line, "Baby can't you see that/I love you like a child," you can't help but be charmed. Marvin Gaye got away with such ridiculous and playful sensuality but precious few others have, which is pretty cool for a still-growing R&B singer from Spain. (Damn if that rhythm guitar doesn't sound lifted from Gaye's party epic "Got to Give It Up," too.)

"Being born in Spain, it's funny that I feel American soul music so deeply," Turner says. It's more fortunate than funny for those folks listening.

Truly; Cuanta Suerte; So Sweet; Tea Time; Amame, Mimame; You Can't Own Me; Mbira Bira; Holly Hollywood; Let's Say Tonight; The Love Monk; When I Work Up; Gone Down South.