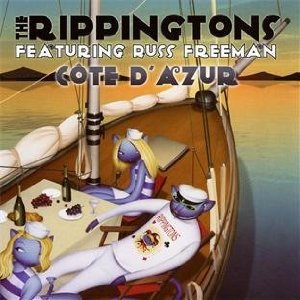 Of the many incarnations of Russ Freeman's The Rippingtons, the current version is one of the strongest, with the players actually cohering as a band and not simply sidemen in Freeman's long-running side project. He remains the guiding light as the principal composer, writer and producer, giving the other musicians some stimulating music to play. Jeff Kashiwa is typically an acceptable, if not exceptional saxophonist, but, freed from any responsibility other than to get his groove on, he falls to the task with relish, as he blows powerfully on "Cote D' Azur" and "Le Calypso."

Able assistance comes from the rhythm section of bassist Rico Belled and drummer Dave Karasony. Bill Heller's keyboard work is strong throughout Cote D' Azur. But the main power source of the band still resides in the facile fingers of Freeman. There's little Freeman can't do with a guitar and though often what The Rippingtons do best is make four minute slices of smooth jazz drizzle, here he's playing with passion and potency. There's nothing phoned in about the flamenco stylings of "Bandol," or the furious Middle Eastern workout, "Passage to Marseilles." Freeman and company go for it and, more often than not, get it, too.

Which is not to say everything on Cote D' Azur goes against the grain. "Postcard From Cannes" and "Riviera Jam" are the standard smoothed-out fare Freeman has cranked out for 24 years and 15 albums, yet somehow, it seems less tedious than on previous Rippington albums. There's enough interesting stuff here, like the duel between Freeman's electric guitar licks and Kashiwa's saxophone on "Rue Paradis," to offset the rote filler.

This far along it's unlikely Freeman is going to redesign The Rippingtons as the second coming of Mahavishnu Orchestra After all, Kenny G is an alumni of the band, so wild improvisational suites and sheets of sound shouldn't be expected, quite yet. Cote D' Azur is a record where Freeman sounds engaged and energized. He really is trying to make some interesting music here and, contrary to expectations, succeeds in doing so.