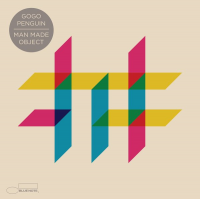 Its stick or twist for GoGo Penguin as they release this, their Blue Note debut and the first of a reputed three album deal. Do they push ahead, expanding their palette of electronica seen through the prism of acoustic jazz, or retreat a tad in deference to their new paymasters by emphasising the more traditional jazz elements of their sound. Should we be concerned that the two years since their breakthrough v2.0 album suggest a creative block or difficulty coping with the raised stakes? While they would hardly be the first act to lose their nerve on entering the major label big league, it is thankfully and emphatically not the case here as "Man Made Object" develops and builds on their early promise.

While its true that the balance in the sound of GoGo Penguin could occasionally be described as precarious, somehow combining that 'acoustic electronica,' loose downbeat 1990s 'trip hop' grooves and the occasional classical influence that creeps into Chris Illingworth's piano style. When they get it right as on v2.0's "In Amber," added to the Mercury nomination inspired reboot of that album, they show their true potential. Any act that can even attempt to balance the cerebal appeal of say a Vijay Iyer, against the more florid, emotional, classically influenced content of an Esbjorn Svennson could conceivably have it all. GoGo Penguin have not only managed it but have consistently done so over 3 albums now.

The title Man Made Object, and the great bauhaus influenced sleeve art, suggest that the electronica influence has come out on top here, when actually the balance between the elements of the band sound is largely similar to v2.0. What has changed though is that the electronica inspired material has developed significantly. So take a track like, personal favourite, "Smarra" (titled "Jam 61" on the promo) whose drum and bass pattern explodes before being offset by the lovely warm analogue synth accent and building to a decayed climax. "Weird Cat" too, perhaps intended as a nod to Radiohead's "Weird Fishes," builds from Nick Blacka's resonant bass line through a skittering drum pattern from Rob Turner before Illingworth chimes in.

"Protest" has another killer bass line from Blacka that Turner and Illingworth negotiate around admirably, building tension towards the climax and sudden cessation just after the four and a half minute mark. But perhaps the best balanced track between the old and the new is "Unspeakable World" where the repetitive Reich influenced piano riff, combines with the percussive taps to end up sounding like the found sound of a typing pool from an imagined soundtrack to a sixties movie. Of course, it is highly unlikely that the soundtrack to such as "Billy Liar" ever simulated a machine glitch quite so well as the final section here -but happy to stand corrected.

In the promotional round for the album the band have spoken of how they find electronica represents the sort of freedom that jazz was meant to embody. For example Nick Blacka has said "Electronic music doesn't have an established set of rules that you have to adhere to, it does represent more freedom. It's not like we don't want to be thought of as a jazz band. But if people think of us like that then we have to adhere to something...." Of course any modus operandi can become a trap if adherence to its precepts becomes more important than following the muse or the moment, but GoGo Penguin sound liberated rather than following some prescriptive ethos.

But there is no need for the jazz police to take umbrage, the wider influences being drawn into a jazz context if anything prove the adaptability of our music. As the quote from Nick Blacka suggests, electronica and jazz have much in common, so cross-fertilisation of this sort can only enrich both—why restrict influences to 'legitimate' and 'other' when it is how you use and develop them that matters. What is important is that GoGo Penguin are a young act that bring something new to the table—it is almost inconceivable that the jazz greats of the past would look to restrict where the music could go in the future to variations on where it had been in the past. And neither should we. Highly recommended.