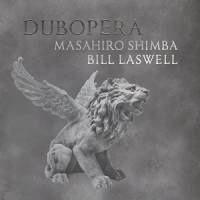 Recently, researchers with the Ligo Collaboration reported that they had detected gravitational waves (predicted by Einstein in his General Theory of Relativity 100 years ago) resulting from the collision between two black holes a billion years ago. Bassist and provocateur Bill Laswell has made a career of doting the same thing with musical genre, creating new and different forms with lasting consequences. Most notable has been Laswell's application of Dub, an electronic progeny of Reggae, to different styles of music as remixes. In this vein, Laswell sites in on some of the monuments of opera with interesting, albeit mixed results.

Joining Laswell is tenor Masahiro Shimba, who proves himself more than equal to the task of upending the world of music for the stage. The opening "Nessun Dorma" (Puccini, from )Turandotis spacious and nearly ambient (hear Ambience Dub, Vols. 1 & 2 (APC Records, 1997)). Laswell assimilates Dub into the treasured arias with a blatent disregard for musical dogma and tradition. It is a refreshing bit of anarchy within the sacred halls of convention. Outstanding are the aforementioned "Nessun Dorma," opening the disc and "Pagilacci" (Leoncavallo, Pagilacci closing it.

Between these bookends a couple of studies, including Leonard Bernstein ("Tonight" from West Side Story) and Antonin Dvorák ("Moon" from Rusalka. These are briefer pieces that reveal Laswell's ability to concentrated pathos into small spaces. Standout in the instruments is tenor saxophonist Peter Apfelbaum, who adds a certain 1980s British spin on the Reggae. This is provocative music that is as easy on the ears as it is to understand and enjoy...if one's mind is open.