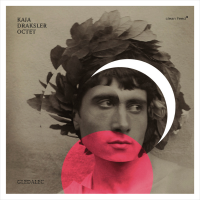 Slovenian pianist Kaja Draksler mines musical forms from much of the last century and beyond for her two CD collection Gledalec. This Octet date constitutes a departure from her more widely distributed work to this point, represented by the impressive solo performance The Lives Of Many Others (Clean Feed, 2013) and the intimate duet This Love (Clean Feed, 2015) with trumpeter Susana Santos Silva. Draksler fashions varied settings for three texts by Chilean poet Pablo Neruda, three by London-based Greek poet Andriana Minou and one by Slovenian poet Gregor Strnisa, articulated by the twin voices of Björk Níelsdóttir (not that Björk, though she did tour with her once) and Laura Polence.

Consequently, the listeners attitude to the often challenging marriage of poetry and music will play a major role in how they approach this set. Furthermore they will need particularly open ears to appreciate the breadth of this album from the 16th century hymn-like "Mirabile Mysterium" which begins proceedings to the five improvs by changing subsets of the Octet interspersed among the compositions. Add to that art song ("Omphalomancy"), jazz ballad ("Omlettio ad Absurdam") and contemporary classical influences (the title cut, with Strnisa's words sung in what is presumably his native tongue) and you get some idea of the ambitious scope.

The serene religious curtain raiser fits in well, especially as there is often something liturgical about how the two singers intertwine elsewhere. That's above all the case on "Canto XI" where Neruda's Spanish words are recited and sung, amid interludes of strangled saxophone cries, tolling percussion and enigmatic piano. Draksler showcases her concept and arrangements rather than her keyboard prowess, although her muscular pianistics shine on the collective "Bizdibocul," alongside George Dumitriu's abrasive violin and Lennart Heyndels' forthright bass.

While generally Draksler places the international cast at the service of the charts, Ab Baars' tenor saxophone alternately snorts and whinnies through a tour de force outing on "The Builder," creating an affecting contrast with the haunting, halting vocal and instrumental unisons. Of the other improvs, Argentinian saxophonist Ada Rave enjoys a terrific free jazz blow out on "(and here who there who)" in the choppy company of Heyndels and drummer Onno Govaert, and sounds barely restrained on the staccato "A Carnival Of Words."

An elegaic extemporized duet by Draksler and Dumitriu brings an intriguing program and clearly a deeply felt personal project to a close.