BY GLENN ASTARITA
October 19, 2017
Sign in to view read count 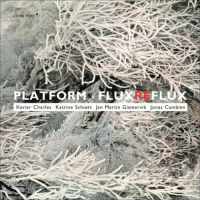 Fractured storylines, along with oddball tunings and Charles' multidimensional phrasings and acoustic effects may fake the listener into thinking the program contains electronics but no such devices are listed on the personnel listings. They occasionally explore the guts of their respective instruments along with subliminal ostinato motifs, searing overlays and cyclical patterns amid Jon Martin Gismervik's delicate or explosive polyrhythmic drumming.

"Reflux" is a free-form jamboree, spiced with rough edges due to cellist Katrine Schiøtt 's zealous plucking techniques as pianist Jonas Cambien tinkers within the lower registers. Here, Gismervik's rumbling patterns light a fire for the front line. But "Ce que le vent d'ouest n'a pas vu," is buoyed by the cellist's prominent single note lines and staccato mechanisms, nicely contrasted by the band's opposing force-field and countermeasures, where disparate sounds come out of nowhere. Moving forward, they lessen the intensity along with hints of melodic content while reenergizing into other blossoming frameworks.

It's a difficult outing to pin down but the results are—perhaps a bit weirdly—refreshing. In addition, most of these pieces emanate from a semi-structured set of ideas that morph into otherworldly sojourns, unleashing a horde of understated surprises.