By DAN MCCLENAGHAN
October 19, 2017
Sign in to view read count 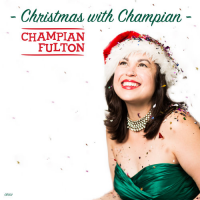 Pianist/vocalist Champian Fulton may be the only kindergartner in history to take a Charlie Parker CD into school for show and tell. The effect of her presentation on her classmates is uncertain, but  she fought the good fight.

Now, almost three decades after the "Bird Goes to  Kindergarten" incident, Champian Fulton can be found on the bandstand and in the recording studio, coming into full bloom as a top tier jazz artist, with nine previous studio albums in her discography, including 2017's excellent  Things We Did Last Summer.

For her third release of 2017 (she's a busy woman), Fulton has crafted a Christmas album, Christmas With Champian.

The set includes the traditional Christmas sounds: "Winter Wonderland," "I'll Be Home for Christmas," "The Christmas Song," "Let It Snow."  And there's a surprise: "Gracias A Dios," sung in Spanish, a beautiful nod from Fulton to her Mexican heritage. Sitting in and blowing gorgeously on muted trumpet is Fulton's father, Stephen Fulton. Add an out of this world piano solo from his daughter.

Fulton closes out with an original, the bluesy, alluring, stride time "Merry Merry Christmas," that sounds like one of the classic tunes of Christmas Present, Christmas Future.