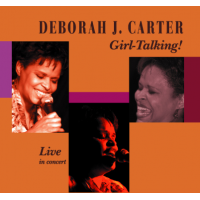 Deborah J. Carter is the epitome of a world class jazz singer. Born in the U.S. with ties in Hawaii and Japan, her home now is in Europe. Her current concert schedule agenda is a global itinerary of performances from Cristofori, Amsterdam to Madrid Spain. Her new recording, Girl-Talking!, highlights one of her live performances at the Pannonica jazz club in Hague, Holland in 2003.

The concert features Carter with her working trio performing a variety of popular covers and jazz influenced songs. From her first note it's evident that Carter is a pro. With a polished and elegant voice and diva-like skills, Carter gives the audience an entertaining performance.

The first set begins with a version of the classic "My Favorite Thing," which gives light to Carter's panache as she sings with playful exuberance while the band delivers equally engaging music. She's in total control when she scats, chats, and vocalizes on Horace Silver's "Sister Sadie." The modern classic "New York State of Mind" is refreshingly smooth as the trio swings along with Carter's lithe lyrics. Other gems include a moving version of John Lennon's timeless "Yesterday" where Carter soulfully expresses the haunting melody.

With captivating vocals, good music, and the right atmosphere, Girl-Talking! is yet another entertaining glimpse of a jazz songstress who deserves a wider audience. It's easy to hear why Deborah Carter is popular with our fellow jazz fans across the ocean.