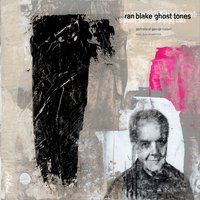 Sometimes an album can haunt you. It can be a companion that follows you through life. In the liner notes for the album: Ghost Tones: Portraits of George Russell (A-Side Records, 2015), pianist and composer Ran Blake reveals his love for composer and bandleader George Russell's album Jazz Workshop (RCA-Victor, 1957): "I listened to it so much that I wore out several copies, each time having to revisit the record store to replace it."

Blake's love for the album was so great that when it went out of print, he started a petition to bring the album back in print. Those who signed included musicians like Ornette Coleman, Gil Evans, Charles Mingus and many others. Unfortunately, he did not succeed immediately, although the album later came back in print, but the handwritten signs of musical passion serve as decoration in the album's booklet and, of course, there is the music. Three compositions from the album are included in Blake's tribute to his old friend and teacher: "Jack's Blues," "Ballad of Hix Blewitt" and "Ezz-Thetic."

"Ezz-Thetic" is the classic composition based on the chords from "Love for Sale." Blake slows the tempo considerably down and lets the chords ring out in the air as he delicately explores the ambience between harmony and dissonance and a soft and hard touch where he shrewdly lets echoes of the original standard emanate from the piano. In fact, throughout the album, with the help of several musicians, Blake waves a complex tapestry between standards, folk music, classical, avant-garde and his own and Russell's music.

The subtitle of the album says Portraits of George Russell and the plural form is not a coincidence. There are many different narratives on the album. One is the story of Blake's fascination with a particular album (Jazz Workshop) and another story is the tale of Russell's own life told through music. It is a narrative thread bookended by a beautiful interpretation of the standard "Autumn Leaves."

Indeed, the mood on the album could be characterized as autumnal. Ghost Tones: Portraits of George Russell is a work that congenially sums up the musical talent of Russell and, at the same time, shows Blake as his kindred spirit, but also as an idiosyncratic artist who goes his own way. The transformed tones of Russell's music echo through Blake's playing and it is shown how Russell's own music is haunted by jazz tradition. Blake does not try to hide this ghost, but, on the contrary, he brings it out into the open -just like he reveals his own inspiration from Russell.

Ghost Tones: Portraits of George Russell forms a complex tribute that underlines the importance of Russell, but also sheds important light on Blake as a composer, player and interpreter and portrays him as an original jazz artist in his own right who, like Russell, acknowledges the musical ghosts of the past.