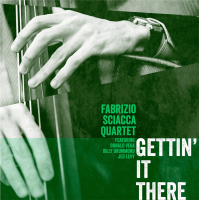 Make no mistake about it, Fabrizio Sciacca isn't merely "gettin' it there." He's already got it here. This debut from the Berklee- and Manhattan School of Music-trained bassist presents an artist with solid intonation, impeccable time, a warm and enveloping tone, and an ear for melody. In short, he has it all.

Leading a top-shelf group filled-out with pianist Donald Vega, drummer Billy Drummond and guest tenorist Jed Levy, Sciacca starts off with a nod to Sam Jones in the form of that bassist's bluesy "One For Amos." It's a number that allows the leader to both sing and swing, with a melodic pizzicato head and some solid walking lines supporting the core. Then he leads from below, choosing all the right notes to support Vega's visions during "Lullaby In Central Park," a 3/4 charmer penned, specifically for this date, by pianist Andrea Domenici.

Visiting Sonny Clark's infrequently performed "Zellmar's Delight," Levy and the leader each make their marks with sanguine statements. Then the frolicsome feelings continue with a chipper tribute to bass icon Ron Carter with the original "For Sir Ron." Sciacca's technical strengths and swing bona fides are clearly established by this point, so heartfelt directness and lyricism pick up the baton for "A Nightingale Sang In Berkeley Square." It's a balladic beauty that emphasizes a less-is-more approach. In the penultimate position rests Levy's "Lonely Goddess," a straight-time feature for his dry-and-spry horn and Vega's piano. It's a notable inclusion, both as a change of pace and for its moody allure. And finally, at program's end, sits Elmo Hope's "One Second Please," a hard bop happening and zestful sign-off driven by Drummond's irrepressible stick work.

The whole album is over and done with in a mere 44 minutes—a display of brevity that plenty of musicians can learn from—and there's not a wasted effort on the playlist. Sciacca really impresses here, displaying a strong understanding of the tradition and a firm sense of self. You never know what the future may hold, but it would certainly appear that he's going places.

One For Amos; Lullaby In Central Park; Zellmar's Delight; For Sir Ron; A Nightingale Sang In Berkeley Square; Lonely Goddess; One Second Please.

Title: Gettin' It There | Year Released: 2019 | Record Label: Self Produced