Home » Jazz Articles » Kristina Koller: Get Out of Town

Kristina Koller: Get Out of Town 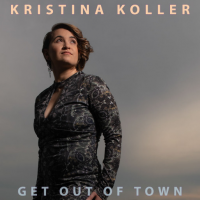 If you do Cole Porter, you are in the big league. Anita O'Day, Ella Fitzgerald, Rosemary Clooney, Susannah McCorkle have all been there and done that. Kristina Koller is a relative newcomer—this is her third album—and is, by choice, in illustrious company. Comparisons are invidious, but what do you do? Imitate? Emulate? Or strike out in a new direction? Koller has mostly set out to do things a little differently, as Oscar Wilde counselled. It was a wise choice to do Porter for a new generation of listeners, in an idiom they could both appreciate and understand. Koller calls herself "jazz-centric," which means "I know the repertoire, but do not expect to hear the same old thing all over again." And you do not.

Koller has ample vocal chops, a sensuous feel (which is very much right for Cole Porter), imagination, and a charming New York accent (Bronx via Westchester County). What marks the music out and makes it interesting are different colors, different rhythmic feels, shifting meters (occasionally excessive); atmospherics and enough melisma to be engaging, but not annoying. Her band on this recording is more than adequate, Fima Chupakhin on piano; James Robbins, bass; and Juán Chiavassa, drums. They really make things go, without getting in Koller's way, and are a big part of why the recording works as well as it does.

"Get Out of Town" opens and provides a slick example of the rhythmic sophistication which underpins much of Koller's work. "What Is This Thing Called Love" is a pulsing straight four. "Greek to You" is one of those sleepers, not much heard, but easy to like. "It's All Right With Me" opens with a vamp cum reverb, and is then jazz-rock. A little different, but not over the top. "Why Don't We Try Staying Home" dates all the way back to 1929. It has been little recorded, other than by some illustrious cabaret singers. "In the Still Of The Night" features evocative piano backing and a lot of sincerity, both well paced. "Just One Of Those Things" is really classic "blue Porter," and conjures up a lot of great players and singers from the past. So it takes some courage to say "Frank Sinatra, Donald Byrd, and now me." Koller's version could not be more distinctive, and no regrets, as Frank would have said. "Every Time We Say Goodbye" finds Koller accompanying herself on ukulele. Not a great idea if your audience hears Chet Baker and Caterina Valente (or Tiny Tim) in their heads. A lot of younger people, however, will not, so you guess it is ok.

Koller is off to a very promising start. One looks forward to seeing where her not inconsiderable talent takes her. Sometimes, you have just got to sing.

Get Out Of Town; What Is This Thing Called Love; Greek To You; It's All Right With Me; Why Don't We Try Staying Home; In The Still Of The Night; Just One Of Those Things; Every Time We Say Goodbye.

Title: Get Out of Town | Year Released: 2022 | Record Label: Self Produced