By David Adler
January 1, 2002
Sign in to view read count 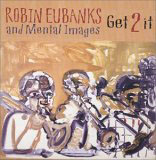 Robin Eubanks reconvenes his Mental Images ensemble on this wholly independent release. Playing both standard and electric trombones, Eubanks leads his players and special guests with enthusiasm and finesse. As on previous releases, he tips his hat to Wayne Shorter, this time with a beautiful "House of Jade" (with electrified intro/outro). The rest of the tracks are originals, ranging from involved full-band numbers ("Cross Currents," "Sabanna," "Indo") to an unconventional, off-the-cuff trio ("Reunion," for bone, guitar, and percussion) to varied duets ("RNB-First Take," with Billy Kilson, and "Essie," with celeb younger brother Kevin). "Metamorphos," the lead-off track, contrasts nicely with the piano-less version that appeared on Dave Holland's 1998 disc Points of View (ECM). And the title track, a polyrhythmic romp with Eubanks-penned vocals sung by Maya Azucena, recalls the early M-Base days to some degree.

Mental Images gets its rhythmic drive chiefly from bassist Lonnie Plaxico and drummer Gene Jackson, with powerful piano/keyboard work from George Colligan and solid trumpet playing from the youngest Eubanks, Duane. In the electric trombone, featured with utmost clarity on the unaccompanied "REM State," the leader has found a highly expressive instrument, and one that allows him to ratchet up the rock element of the project (check out "Blues for Jimi"). The "Audio Notes," too, are a nice and rather unusual touch; at album's end, Eubanks amiably greets the listener with some spoken thoughts about the music. (Joanne Brackeen's 2000 Arkadia release, Popsicle Illusion, ended with a similar idea, a recorded interview.)