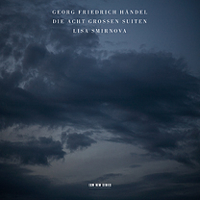 In late 1720, Saxon cum British composer/impresario George Friedrich Handel was having an intellectual property problem. In the middle of his efforts to begin the new opera season at King's Theater in Haymarket, London, he discovered that one Jeanne Roger was planning on publishing a pirated copy of Handel's keyboard suites (sans a publication date) in Holland. Handel is way better known for his vocal writing, but had been honing these keyboard pieces for sometime, often using them for instruction. As a result, a sizable number of his unpublished scores were floating around England and mainland Europe, a number in excess of the pirated pieces of his contemporaries Bach and Scarlatti. Handel was a hot musical commodity, knew it and wanted to protect that position.

With neoconservative zeal, Handel preempted Roger by publishing the scores himself as an authorized edition, with special permission from Britain's king, George I. Handel's Suites de Pieces pour le Clavecin appeared formally on November 14, 1720. These keyboard suites were from both Handel's German and English periods. While there is no fast scholarship, they are thought to have all been composed sometime before 1706, with Handel making revisions up to the point of his publication. They make up half of Handel's solo keyboard suite output.

Handel was much like British poet and statesman George Gordon, Lord Byron, throwing off masterpieces, left and right, with little or no effort. Handel was also a cagey businessman gaining and losing several fortunes in his long life. He was not about to let some wet- behind-the-ears Dutchman rain on his parade. This is the backdrop for these particular keyboard suites being brought together and published when they were. Handel composed the pieces for the harpsichord as it was the keyboard of the time. While this is all well and good, in 1955 along came an eccentric Canadian named Glenn Gould playing Bach on the modern piano, hence all Baroque pieces being fair game for the hammerklavier Beethoven (or Clementi) built. While the Handel suites have enjoyed several recorded performances on the modern piano, Russian pianist Lisa Sminova provides good reason for reconsideration and appreciation.

Sminova makes her ECM debut with these rarely collected suites. Handel on the piano is no more tricky than Bach, but does require restraining Romantic inclination. It is easy to make Bach sound like Mozart, Mozart like Beethoven and Beethoven like Brahms. But capturing the piquant and sharp Baroque period touches on the modern piano can be a challenge when the player has been steeped in the more Classical and Romantic sonics orbiting Beethoven. Smirnova set out specifically avoiding these pitfalls, turning in a more than credible piano performance.

Smirnova began her proper friendship with the suites in 2000 and then, in earnest, at Austria's Schloss Goldegg, where she recorded these suites between 2007 and 2009. It is apparent that she gave much thought and practice to the material and has made its transition to the modern piano a revelation. While not the first pianist to record Handel keyboard suites, Smirnova does grant them ample room to breathe while remaining between the contrapuntal ditches. Smirnova's tempi are well chosen and rehearsed and on the piano, the Baroque voice is given a new depth and breadth that open wide the expressiveness of these pieces.

Of ready note are Smirnova's adagio performances, which reveal Handel at his most unguarded. In contrast to much of Bach and Scarlatti, Handel is not interested in teaching anything. Rather, he is trying to produce rare keyboard music, mostly within the contrapuntal frame perfected by Bach without sounding over-principled: where Bach is pedantic, Handel is pragmatic. Smirnova picks up on this, extracting all of Handel's cosmopolitan inclinations to the surface of these compositions. The faster-paced pieces are dispatched with the Baroque tartness of the harpsichord while taking advantage of the tonal well afforded the modern piano.