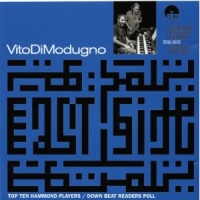 Italian organist Vito Di Modugno has made a solid name for himself with several well-received Red Records releases that include, Organ Trio Plus Guests (2007), Organ Grooves (2008), Organ Trio, Volume 2 (2009), and now the delightfully swinging East Side. Di Modugno is first among a progressive group of B3 specialists who are charging mainstream jazz with a well-developed vision that is neither too traditional nor overly experimental.

Di Modugno opens his recital with the titled original, introducing the piece with a B3 flourish owing much to the great Jimmy Smith without being enslaved by him. That part becomes apparent when Di Modugno switches to Fender Rhodes and the ensemble begins properly. Despite its title, "East Side Blue" is not a blues but a simple piece, not unlike plainchant, where Di Modugno and special guests tenor saxophonist Jerry Bergonzi and trumpeter Fabio Morgera have a plum perch from which to launch solos with saxophonist Michele Carrabba and guitarist Pietro Condorelli, from the leader's ensemble. Di Modugno's cosmopolitan brand of jazz is easy and accessible. This is sharp and vibrant music borne of the greasy chitlin' circuit yet smelling of cologne and clove cigarettes. There is a European sophistication here becoming of the music and musicianship that is thanks enough to America for this gift of jazz. Swing on.