BY DOUG COLLETTE
February 18, 2012
Sign in to view read count 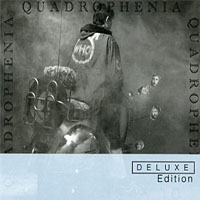 Tommy (MCA, 1969) brought The Who to a mainstream audience and Who's Next (MCA, 1971) solidified its position in the pantheon of 1960's-1970's artists. But it is Quadrophenia (MCA, 1973) that has grown exponentially in importance—not only in the history of the band, but in the history of rock.

Quadrophenia is the second rock opera to be authored by guitarist Pete Townshend (the third, if you count the much more abbreviated "A Quick One," from the 1966 Polydor album of the same name). The author's self-effacing essay on this Deluxe Edition radiates a clarity of mind derived from the healthy detachment of hindsight and it is from that perspective that he helped prepare this edition, as well as the larger Director's Cut (Universal, 2011), including vinyl and more demos). Quadrophenia fully deserves and tremendously benefits from the treatment it's afforded.

The remix/remastering, for one thing, reveals how tightly interwoven the arrangements are throughout the original album's seventeen tracks. The Who's performance is beyond reproach, as the basic tracks find the quartet playing with a remarkable power and precision not all that far removed from the intensity of its live performances (already the stuff of legend at the time of the album's original release as a double-LP set).

There is some downside to the audio clarity, however, in that it reduces the density of the sound. Horns (played by bassist John Entwistle) and synthesizer tracks (authored by Townshend) interweave with acoustic and electric guitars, keyboards, bass, drums and vocals by both lead singer Roger Daltrey and the head of The Who himself. Still it's a marvel to behold how the simplicity of the songs takes on such emotional and instrumental complexity in completed form.

The inclusion of demos recorded by Townshend in anticipation (and sometimes not) of this Who album sheds further light on the development of the material, the most overriding impression of which may be the remarkable level of energy and overall similarity of these recordings to the band's finished takes. But there's no small amount of serendipity involved here too, as Townshend describes the creative impulses that gave birth to keynote tracks within the larger piece.

"The Real Me," with its slightly dissonant antique acoustics combined with heartbeat synth, reveals the angst at the heart of this song cycle was only slightly camouflaged autobiography. "Drowned" represents a crucial dramatic point for the main character Jimmy the Mod, though it was written, according to its author, three years before the earliest gestation of the storyline that would become this song cycle. And "Love Reign O'er Me," is, put simply, the most haunting of Quadrophenia's four main melodic themes, not to mention one of Townshend's loveliest creations.

Within a double fold digipak, where the original graphics are restored and expanded through two booklets of photos and text that complement the storyline, this version of Quadrophenia can offer a heightened sensory experience quite comparable to that of its original release.