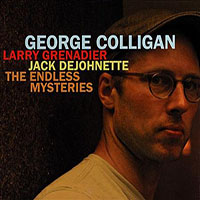 While music fans often think of the artists they love as gifted people whose lives are consumed by the pursuit of their art, all-too-often they ignore equally important, if seemingly more mundane, needs: making a living, perhaps having a family...things to which most people aspire. With music sales on the decline, most musicians pay the rent by touring and, in some cases, teaching, but for those who've failed to achieve greater recognition, that needn't imply they're anything less than top-tier.

Count pianist George Colligan amongst that group of musicians who may support themselves and their families through teaching and touring with bigger names, but are as deserving of attention as any with whom they play. That Colligan is a triple threat—not just a terrific pianist, but a great drummer (amply demonstrated on pianist Kerry Politzer's overlooked Labyrinth, Polisonic, 2005), and trumpeter of worth (on his own Runaway, Sunnyside, 2008)—only means a musical breadth that makes him an even more valuable recruit for artists like Don Byron, who enlisted Colligan in the studio and on the road for his Junior Walker tribute, Doin' the Boomerang (Blue Note, 2006).

Colligan has also been a key member of veteran drummer Jack DeJohnette's touring band, heard in Ottawa in 2012 and on the download-only Live at Yoshi's 2010 (Golden Beams, 2011). DeJohnette returns the favor by playing on Colligan's The Endless Mysteries, and the chemistry built over the past four years is in clear evidence throughout this set of ten Colligan compositions, where the pianist's intrinsic virtuosity ranges from cool to simmering to flat-out boiling over.

While a purely acoustic set, contrasting other Colligan outings like his fully electrified Mad Science trio, heard on Realization (Sirocco, 2005), and the dual-casted acoustic and electric mix on Blood Pressure (Ultimatum, 2006), The Endless Mysteries still represents an expansive cross-section of Colligan's multifarious interests, even if it doesn't contain the mix of cover material heard on Living For The City (Steeplechase, 2011), where he drew on diverse sources ranging from Stevie Wonder and Bonnie Raitt to Wayne Shorter, Burt Bacharach and Antonio Carlos Jobim. Still, with bassist Larry Grenadier fleshing out the trio, The Endless Mysteries traverses similarly broad territory, from Latinesque and lyrical ("Waiting for Solitude") to modal and hard-swinging ("Song for Tarahumera").

Between the similarly Latin-tiinged bossa pulse of "Her Majesty" and more harmonically oblique, bass riff-driven "It's Hard Work!," Colligan moves away from the piano for "Liam's Lament," which begins with the firm attack of Grenadier's a cappella intro but ultimately turns into a rubato trio piece, with Collligan featured on melodica. DeJohnette plays more colorist than groove-meister here, though his unmistakably loose yet unshakable feel is stamped all over the recording—locked, tongue-in-groove, with the similarly rock-steady Grenadier—as is his ability to play in totally free contexts, as he does on the aptly titled "Outrage," where the drummer's sharp punctuations are matched by Colligan's own aggressive stance.

But Colligan is capable of elegant beauty as well. The haunting miniature, "Thoughts of Ana," is more than enough to suggest that it might be time for another solo piano album; his website suggests a new trio record is in the works for Steeplechase this year, but with more than a decade since his last solo outing, Return to Copenhagen (Steeplechase, 2002)...perhaps in 2015?

Irrespective of what's to come, Colligan continues to grow as a performer, composer and bandleader. In a market flooded with piano trio records, The Endless Mysteries stands out as the confluence of collective chemistry, individualistic strength and compositional breadth. Still in his mid-40s, Colligan's career has been a slow build, but it seems only a matter of time before he reaches critical mass and the larger audience he so deserves discovers what the higher profile leaders, who continue to employ him, already know.

Waiting for Solitude; Song for Tarahumera; Her Majesty; Liam's Lament; It's Hard Work!; Thoughts of Ana; Outrage; The Endless Mysteries; When the Moon is in the Sky; If the Mountain was Smooth, You Couldn't Climb It.