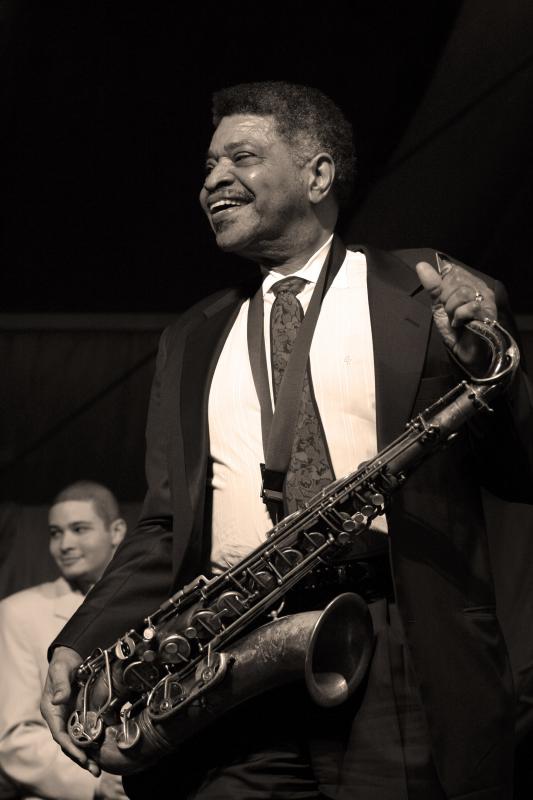 George Coleman's enfolding tenor saxophone tone is the embodiment of the endangered old school sound. His warm organically bluesy embrace invites the listener to sit closer, whether this Memphis man is picking spontaneously from the standards book or maybe selecting one of his own compositions. Actually, Coleman grew up down south, getting his first big break with BB King, but he has now been ensconced in New York City for just over 50 years.

I dropped around to his East 9th Street apartment, aware that Coleman has experienced heavy trauma over the preceding months. His wife died following a long illness and his ex-wife (the mother of his two children) also passed on during that same period. As recently as January of 2009, Coleman was at the Jazz Standard with his Family Legacy band. Ex-wife Gloria played deep Hammond organ, occasionally singing, whilst George Junior was at the drums. Guitarist Eric Johnson was the only non-family member and the music took on a different gospel-soul groove slant to Coleman's accustomed performances.

Coleman began our talk by stating that he doesn't usually enjoy being interviewed, but as we progressed he seemed to warm to the idea, beginning to recall the old days more vividly, becoming steadily more animated. This is a player who has worked beside Miles Davis, Max Roach, Lionel Hampton and Herbie Hancock, to name just a smattering of his key employers. Since 1974, Coleman has concentrated on leading his own outfits, working through a variety of ensemble sizes. Recently, he's settled on a quartet format.

The glowing-yet-rugged tenor man has been threatening to retire for most of the last decade, but Coleman just can't seem to manage shying away from the spotlight. Clubland keeps making demands. He played a January residency at Jazz Standard, with George Junior on drums, Ray Drummond (bass) and Harold Mabern (piano). "I don't work steady," Coleman says. "As a matter of fact, I'm in semi-retirement. I only do special jobs. I don't travel any more. I don't go to Europe. With the economy the way it is, the people don't want to pay you the money or give you comfortable quarters. Not me, anyway!"

Lucrative offers might still be in place for players such as Herbie Hancock, Chick Corea or Keith Jarrett, but the medium-ground stars have felt the effects of the recession. Coleman deliberately limits himself to appearances in New York City nowadays. He only goes out when the pay is right. It's been since 2001 he last played in Europe, when he toured as a guest with Ahmad Jamal, to celebrate the pianist's 70th birthday (A L'Olympia, Dreyfus).

"I can be right home in 10 or 15 minutes, from wherever I play in the city," Coleman says, with satisfied emphasis. "I ain't gotta be out there gettin' on a plane early in the morning, packin' suitcases an' all that. I'm finished with that, man. I don't like it, with all the security at the airport. That's a turn-off in itself. I'm an old man! I just turned 75 last Monday! I don't have any desire to be out there any more, man. It just gives me great pleasure, though, to see the people come out to hear us. Usually, what people say is 'man, you're the only one left' and I probably am. Dizzy, Miles, Gene Ammons, Johnny Griffin. All the great players that I grew up with..."

Unfortunately, Coleman has no immediate plans to record or release any older material. It's now nearly a decade since his last set of new material, the 4 Generations of Miles (Chesky Records).

Coleman also led a two-nighter at Smoke last month, he and Mabern joined by bassman John Webber and drummer Joe Farnsworth. "Full houses both nights, with all that bad weather, all that wind and rain," Coleman says, proudly. "We were very fortunate, but we always do good up there. That's the reason for our success. We play stuff that people enjoy. They don't just clap out of respect, they clap because they enjoy what we're doing. My fans are my allies."

Mabern is an old friend. "We've been playing together for well over 50 years," says Coleman. "We started back in Memphis. It wasn't so much gigs, because they weren't paying no money. Then when I left, he played with my brother, who was a musician at that time."

Although Coleman is primarily known as a lowdown tenor man, he actually started out on the alto, inspired by Charlie Parker. It's quite possible that he might never have switched to tenor if it wasn't for a touch of fate in 1953, after joining BB King's band. "I grew up playing the blues, so it wasn't much of a transition. BB needed a tenor player. That was the real reason why I moved to the tenor. He bought the instrument for me...." Shortly after leaving King, Coleman recorded with Hammond organist Jimmy Smith and, prior to joining Miles Davis, he had a spell with trombonist Slide Hampton. The albums Coleman recorded with Miles included Seven Steps To Heaven and My Funny Valentine. The tenor man was eventually replaced by Wayne Shorter.

Mabern, Webber and Farnsworth will also be on hand for this month's six-night stint at Dizzy's Club. Although technically billed as part of the club's Sing Into Spring season there are, oddly, no plans for any guest vocalists to appear. Fellow tenor man Eric Alexander will be guesting, providing the voice of his horn. Coleman has been one of Alexander's chief influences. "People say so. He's sort of my protégé," Coleman agrees. The two have been playing together with a fair degree of regularity.

Perhaps as expected, Coleman has no idea what the band's repertoire will be at Dizzy's. "Sometimes I bring a list and I'll take a glance at it from time to time. I'll ask the guys, what would you like to be featured on? We just move it around. We play ballads, Latin, blues. I don't play too much of my own stuff. I play "Amsterdam" every once in a while. That's one that people like, a Latin thing that I composed back in the '70s. Eric just recorded a composition of mine that was written for my octet, called "Revival Of The Fittest." I never was crazy about my own compositions, but the way he played it, I said, wow, that sounds like a pretty decent tune."

Even so, Coleman is eager for a re-awakening of his composing side, as he's just moved his Fender Rhodes electric piano back into the apartment.

When I ask him about what's perceived as a husky, bluesy edge to his tenor tone, Coleman doesn't admit to this being a result of his Memphis upbringing: "I divorced that many years ago. It's international, universal. We're not crafting in any special category. We love bebop, we play the stuff of yesteryear. We play ballads that date back to the Irving Berlin era and way back to Charlie Parker, Dizzy Gillespie. We bypass somewhat the Ornette Coleman era, we don't do too much of that. I played "When The Saints Go Marching In" with Lionel Hampton. That was one of the featured numbers of the night. All the guys would get off the stand and go march around the venue. He had an interesting book, some nice arrangements. Thad Jones did a couple for him, Frank Foster too."

Coleman was with Hampton in 1965, representing a stylistic step backwards in time following his appearance on Herbie Hancock's Maiden Voyage album. "I was never in anybody's band for over a year, man, in the whole of my career!" he laughs. Coleman found some kind of stability once he decided to concentrate on running his own bands, from 1974 onwards. His most ambitious setting was the octet group, where his compositional and arranging activities were probably at their peak.

"I was hearing those kind of things. I grew up with guys that were very talented in those areas. I was 17 years old. I'd never been to any conservatory at all, but I could write an arrangement. Just out of my own intuitiveness and expertise. I had good ears and I knew something about harmony."

Coleman appears to be concerned about the way jazz evolved in the middle '60s. On the one hand, he seems to reject freely improvised experimentation, but conversely such methods (and his rejection of them) weigh on his mind somewhat. "There were some guys that were playing differently that could have been considered 'out,' like Eddie 'Lockjaw' Davis. His approach to saxophone playing was very unique and creative. You can't find no guys that can emulate him. Guys sound like John Coltrane, but you can't find nobody that sounds like Lockjaw." Coleman also cites Paul Gonsalves as a particular favorite, perhaps overlooked nowadays.

Of course, this is a man who played with one of jazz music's most innovative figures, the drummer Max Roach. Coleman joined the quintet in 1958, travelling to Chicago with his old friend trumpeter Booker Little. It was Roach who soon prompted a mass exodus to New York City, where Coleman has lived ever since.

"First of all, no one could play as fast as him [Roach]," Coleman recalls. "He was the king of playing up-tempo. When I joined the band, that was a challenge. I hadn't been playing that long. It was different because we were playing fast and there was no keyboard, just the bass playing one note. We were following the harmonic structures."

Coleman has occasionally collaborated with musicians who have been concerned with testing the tensile skin of jazz. Roach, Richie Beirach, Elvin Jones and Hancock spring to mind, even some of his own larger ensemble configurations. In recent years, though, Coleman has been addressing the very heart of the music, completely immersing himself in the standard form. In no way does this suggest any degree of slackness. His solos are always fiery and tough, whilst his tone is also capable of tender ballad negotiation. Sitting here in his apartment, relaxing, Coleman might be relishing the onset of twilight career inactivity, but at those recent Jazz Standard and Smoke gigs, the audiences found a man who becomes inflamed with the passion of jazz, right there, while he's treading those boards, exchanging vital vibrations with his eager appreciators. It'll be the same at Dizzy's this month...

George Coleman, I Could Write A Book (The Music of Richard Rodgers) (Telarc, 1998)