By Robert Bush
February 9, 2011
Sign in to view read count 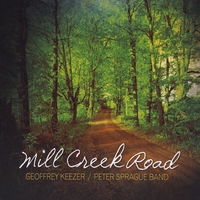 Sprague's "India Zach" follows, and it's a different type of rhythmic triumph. While the guitar lays down an off-center vamp, Keezer jumps on the melody, which is joyous and inventive with a kind of stop-and-start feel to it. Keezer's playing cascades like water careening down a staircase, then suddenly the band zeroes in on unison, stabbing and smacking straight into a pedal tone, which launches Sprague's sitarist Ravi Shankar meets guitarist Robert Johnson solo. The pedal tones modulate, reflecting changes of mood, then shift gears again back to that ebullient melody with Sprague at the helm this time. There's a kind of coda that leads to lower tones which set up Zach Harmon's dramatic, percolating tabla solo. The band whips through the theme one last time, ending with a bang.