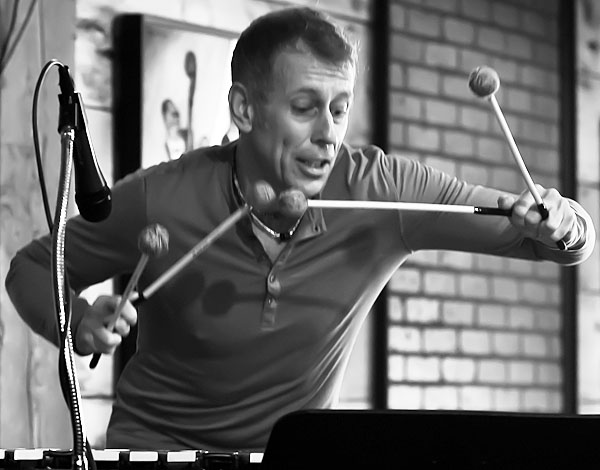 BY BILL LEIKAM
April 2, 2011
Sign in to view read count
Geoffrey Keezer/Joe Locke Duo
Douglas Beach House
Half Moon Bay, CA
March 13, 2011
There are wonderful, well-produced, rehearsed bands that play the Douglas Beach House (aka Bach Dancing & Dynamite Society), but on occasion, within those gems, a high-caret diamond arrives and astonishes the audience. That's what came down when pianist Geoffrey Keezer and vibraphonist Joe Locke teamed up and landed at the Douglas Beach House on March 13, 2011. The audience was more than fortunate that the duo was able to come together, performing a stellar concert, one of the most memorable in many years.
It was obvious from the outset of the first tune, Locke's "I Miss New York (When I Been Gone Too Long)," that not only did these two musicians smile at each other back and forth, but the vibraphonist's facial expressions indicated he was having a great deal of fun playing with Keezer. his four mallets flying with incredible speed across the bars. When he was leading, Keezer raced across the keys of the Steinway grand piano, exactly in time with Locke. From this number onward, Locke and Keezer pushed each other over the edge and into some very deep improvisation.
On "Like Someone in Love," Locke led the piece for several bars before Keezer joined him, his piano seemingly talking with Locke's vibraphone. Back and forth they went, exchanging leads with one another, almost like playing tag. At one point, Keezer stopped and Locke soloed for a short stint, until the pianist reentered, and the duo took the song to its conclusion—and to huge applause.

Locke's "Miramar" reflected Miramar Beach, located directly across the narrow street from the Douglas Beach House. Locke composed this tune after dropping into the Douglas Beach House to hear a relatively unknown singer named Kenny Washington - Vocals (with whom the vibraphonist would later collaborate on For the Love of You (E1, 2010)). Locke opened the number with a heavy reverb on his vibraphone; shortly thereafter, Keezer came in, but while Locke careened across the bars, the pianist laid back and under, playing at a slower tempo. These counterpoints worked extraordinarily well, but would never have worked for anyone of lesser skill. The number had a powerhouse, abrupt ending that both musicians hit with absolute precision.

The second set brought Kenny Washington onstage. Before he took the stage, however, Locke talked about meeting Washington at the Douglas Beach House, and noted how impressed he was to hearthe singer's range and his phrasing. Out of the several songs that Washington sang, the most touching was Locke's "Verrazano Moon," dedicated to saxophonist Bob Berg, a good friend of Locke's who was tragically killed in a car accident in 2002. When leaving the funeral ceremony, Locke became lost in Brooklyn, and found himself beneath the Verrazano Bridge looking at a big full moon ahead. Washington sang the song with such a depth of feeling that by the time that this amazing trio wrapped the song, Locke was clearly holding back tears.

There are times when great jazz music is performed at the Douglas Beach House, but on rare occasions such as this, with Keezer and Locke, sheer magic takes place. By the end of this memorable concert, the audience was privy to an enchanting performance, giving the duo sincere and heart-felt standing ovations.