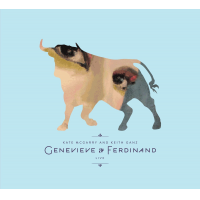 There is no greater beacon of sincerity, honesty and emotional purity than Kate McGarry. She's proven it time and again, whether singing standards, modern day favorites, originals or obscurities, and she does so once more on Genevieve & Ferdinand.

In some ways this album marks a new beginning for McGarry; it's her first live album, first duo recording, and first release on the Sunnyside imprint. All of that might lead people to believe that McGarry's starting with a blank slate here, but nothing could be further from the truth. She actually capitalizes on her own history and an affinity for intimacy during this beautiful and bewitching album. She weaves her way through eleven songs that reference her previous recordings ("Aquelas Coisas Todas," "Aqui O" and "Let's Face The Music And Dance"), her back story ("Ten Little Indians") and the spirit of the American singer-songwriter breed.

As the album unfolds, McGarry's voice is the obvious focal point. Her heartfelt delivery on Paul Simon's "American Tune" and her own "Ten Little Indians" reinforce her reputation as one who sings from the heart. In that respect, nothing changes as the album continues, but the ear's perspective is altered after those first two songs. The chemistry that exists between McGarry and her most trusted ally— guitarist/husband Keith Ganz—becomes readily apparent during "Aquelas Coisas Todas/Third Wind/Aqui O," and it's hard not to notice it after that point. Ganz brings an understated sophistication to every track on the album and he proves to be a master tailor of moods, making the perfect outfits to drape around McGarry.

Together, McGarry and Ganz—a.k.a Genevieve and Ferdinand—wind their way through an eclectic playlist that's charming as can be. They shine a light on underexposed songwriters like Paul Curreri ("Beneath A Crozet Trestle Bridge") and Devon Sproule ("Plea For A Good Night's Rest"), reimagine the work of James Taylor ("Line 'Em Up"), and deliver a haunting and powerful rendition of an Irving Berlin classic ("Let's Face The Music And Dance"). Two other singular vocal talents— Gian Slater and Theo Bleckmann—join up for a slow and enchanted take on Todd Rundgren's "Pretending To Care," but everything else remains a tale of two artists.

Genevieve & Ferdinand doesn't contain bold proclamations or daring musical acts, but it's filled with some of the most genuine music that anybody is likely to ever hear. That's the gift that McGarry and Ganz give, and it's a gift that keeps giving more with each listen.