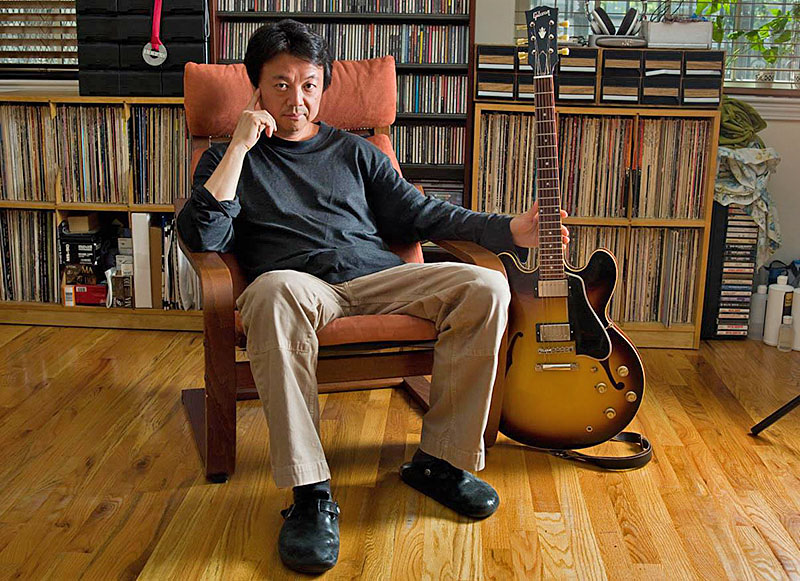 By Jud Branam
September 4, 2013
Sign in to view read count

Fresh off the release of Fractal Attraction (Simp, 2013), which blends traditional combo jazz lineups and approaches with a unique take on vocal jazz, Gene Ess is a man with a lot on his mind as it pertains to career, place—and music in general.

Ess is enthusiastic about his love of jazz, classical and rock music, but is also pensive about the tough state of the music economy and the prospects for working jazz. He's also excited about the immediacy and interplay of his guitar work with vocalist Thana Alexa, as evidenced by Fractal Attraction.

'Fractal' is the name given to images, landscapes, sounds, and any other pattern that is self-similar in nature; that is, if you look at one small part, no matter how small, you get a sense of the whole picture.

Ess acknowledges that featuring a female singer carries some risk with music fans. "Some People, when they see a female vocalist, they're a little taken aback," he says. "I don't even consider Thana's soloing with her voice to be scatting, it's far deeper than that. A lot of the vocalists who do scat kind of play off the melody, whereas Thana's more like an alto saxophone."

The results, he said, were even better than he expected.

He's looking forward to tours of Japan and Europe to support the new record, but the dedicated father is also ambivalent about long stints on the road. And so it goes. While getting the record out into the marketplace is a big priority, it pales in comparison with spending as much time at home with his 9 year-old son as possible.

"I don't want to phone in my fatherhood like that, when my kid is at such a young age," he says. Even though gigs abroad pay much higher than New York clubs, "I don't really travel and do gigs that are not compelling to me musically."

And that's a statement, given that life in New York is a continual financial challenge.

"It's getting very expensive to live in any of the boroughs here," Ess said, from his Queens, New York home. "Even the great players here in New York are teaching and many of them are playing commercial music—what we call club dates here—behind the scenes, while they're doing their jazz gig. I've been fortunate that I've been doing this a long time and have been able to pay the rent, but it's not easy."

That challenge includes working to fill out an international tour by chasing down booking agents in various places, time zones and languages.

"Maybe I'm too introspective or introverted," Ess says, "but it's difficult to beat your own drum. Maybe it's necessary in this time and age."

He recalls sage words from guitar legend Pat Martino, on the topic. "He told me that the actual making of instrumental, virtuosic music, he didn't really even think of it as a business. That's for the love of doing it—everything else is the business side. "If I was in any other business, at this point in my life I would think I would have built up a lot of assets and whatnot, but nobody pays you to practice, nobody puts anything into your retirement, it's kind of scary. But hey, I love the music and I want to do this full time so what can I say?"

Ess, who worked for years with legendary drummer Rashied Ali, has a recording philosophy that would have suited Ali and other classic players.

"Many of the jazz records that I listen to over and over again, like Coltrane or Miles Davis records, were all pretty much recorded live to multi-track or live to two-track," Ess explained. "A lot of jazz records being released now are so perfect because people will spend a week in a studio perfecting every note of a guitar solo. Then it's really not a solo any more, it's more compositional and making it perfect within the context of the recording."

Likewise, the arrangement with Alexa's vocals, pianist David Berkman, bassist Thomson Kneeland and drummer Gene Jackson was something that came to him organically during the run-up to recording.

He initially planned a classic combo record led by guitar and saxophone, "but as I was preparing to do that, my body didn't agree with that. I wanted to hear a vocal to it, but I wanted to hear it more as a horn or instrument. That's how this album came about."

"For this record and actually my last bunch of records, I just go in, pick the bunch of musicians I want to and play the music. It's pretty much live to multi-track. Every track on the new record is pretty much first takes or second take after a false start. Here and there there's a mistake—the music was challenging enough that some aspects had to be fixed, but it's like a jazz performance, we went in and played and that's what came out."

"For jazz, I just want to have our peaks and valleys in the performance as it should be and not fix it in the mix, or whatever they call it. It doesn't matter because they play great, and what you hear is like what you get when you go to see them."

Ess has played with Gene Jackson since 1995, and feels confident enough in the veteran drummer to allow for such a warts-and-all approach. "He's one of those guys who fit my music like a hand in glove. Gene is the type of drummer I really like working with, he has that great swing factor which is really important to me. No matter how complex the music becomes, I want it to swing and have that John Bonham drive or Elvin Jones push."

Indeed, talk to Ess and you'll hear a stream of references to musicians in every genre, reflective of his deep well of musical experience, both playing and listening. Ess says he spent his younger years listening to music 24/7—"It's almost like learning a language, it's very important to hear someone speak it to you and you try to speak it back." After growing up listening to classical music, he spent years on everything from bebop sides to Led Zeppelin. Now, he still listens to a lot of music, interspersed with "periods where I'm my own stereo, where I sit in front of the piano and play whatever's in my head. Whenever I feel like I'm full of ideas I try to document it."

Ess acknowledges that the vocal and hard jazz attack of parts of "Descent" on his new record have a Zeppelinesque sound, adding "Led Zeppelin sounds like the Coltrane Quartet to me. The vibe is there, those guys really played their instruments. What has happened to pop music that people don't really play their instruments? It's like it became passé to be able to play. "Hopefully it's all beginning to come back in fashion, but in the world of jazz it's always about the playing and about the music. That's what I love about the world I'm in, it's about merit for the most part."

Ess also keeps a select few students, but so far he hasn't joined the rising number of jazz players teaching at the college level. "It's really unbelievable," he said, "jazz education has become this massive industry all around the world."

Also amazing, he adds is the constant flow of fresh, young players from jazz studies programs, who make their move to conquer New York, regardless of how low the pay is. "Every semester there are competent players pouring in from around the world to New York City, all fighting for that very small amount of job opportunities. The schools are putting out all these very good players for not that many jobs. A lot of them are really good players," Ess says. "It's great that there are so many young kids interested in this great music, but I've heard some really established players say they don't have the work they'd like because they're not going to work for nothing."