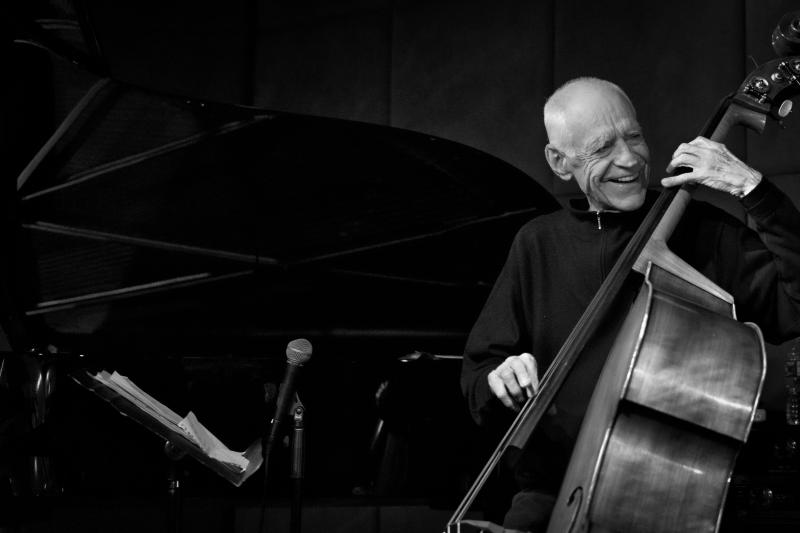 Anyone old enough to remember when special effects in films were handmade has probably noticed the lack of apparent weight in modern CGI. Compare, for example, the cityscapes of Blade Runner 2049 to those of its 1982 predecessor, wherein every physical model feels integrated into its surrounding environment. Gary Peacock is among an increasingly rare crop of artists bringing those nostalgic feelings of presence into focus, and with an attention to detail that indeed evokes classic cinema. When he and his trio with pianist Marc Copland and drummer Joey Baron demonstrated as much on the Jazz Standard stage in celebration of their freshly pressed ECM album Tangents, the effects were more than special: they went straight to the heart.

Like his former trio-mate Keith Jarrett, Peacock introduces tunes with an organic bravado that few others possess, and in this fashion welcomed hungry ears to the feast of Bruno Martino's "Estate" with savory fortitude. Lilting yet robust, his phrasings eased into wonder. With equal respect for melody and circumstance, the trio embodied the swing of this music, smiling through the changes. As Copland and Baron spoke with their eyes over the fulcrum of Peacock's bass, they responded in good humor.

Lifetimes of memory flow through Peacock's veins, and nowhere so tactilely as in "Gloria's Step." The Scott LaFaro tune hinted at the frustrations of its composer's untimely end with dissonances that were at once dark and playful, while Copland riffed chromatically on Peacock's laddering. Building on this level of description, the pianist traced spirals of color in "I Loves You Porgy," another tune with strong LaFaro associations. Its ponderous leanings gave Peacock that much more leeway to explore his instrument in pursuit of a bluesy finish.

To say that Peacock holds a wealth of experience in his tone and touch would be an understatement, as was evident in his own "Vignette," which skimmed across wide vistas of land and sea, and in Wayne Shorter's "Footprints," which found him harmonizing with Copland like a translator with his subject. Most remarkable about Peacock here, though, was his ability to lend rhythm to everything he didn't play. Likewise, Baron enchanted with his framing of "Doxy." He began and ended by hitting two stones together, and along the way played the drums with bare hands, linking a chain of grooves and inward asides, and even melodically recreating the famous Sonny Rollins theme at the kit.

True to surname, Peacock unfolded a fan of multicolored beauty across the night, revealing one shining eye of insight after another until the patient spread of it all glowed in the spotlights. Such is his modus operandi, and it works because he knows no other way.