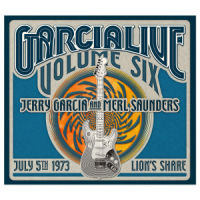 A cursory review of Garcia Live Volume Six reveals much that's familiar about such titles including personnel (keyboardist/vocalist Merl Saunders, bassist John Kahn and drummer Bill Vitt) and material ("I Second That Emotion," "The Night They Drove Old Dixie Down"). But a closer perusal uncovers elements that make July 5, 1973 Lion's Share a distinctive entry in the solo discography of guitarist/songwriter/vocalist Jerry Garcia.

Rare choices of song, such as "She's Got Charisma," suggest an expansive approach to this appearance, though not unlike previous releases, where Garcia & co. have entered the rarefied air more often explored by the Grateful Dead and he transition into the familiar funk of "That's All Right Mama" only highlights the ambiance the band creates. But the presence of an 'unknown trumpeter' who enters the proceedings during set two and remains for the duration of the performance amplifies the adventurous approach of this performance at the intimate California venue documented on this three-CD set.

The ever-so-brief nod to J.J. Cale's "After Midnight" suggests the songs themselves are merely excuses for the band to jam, which they do, leisurely and extensively (though there's no denying the emotional investment within Garcia's singing of "Someday Baby"). And while the inability to source the identity of the horn player is highly unusual, given that Jerry Garcia's work is part of the Grateful Dead zeitgeist usually annotated with meticulous detail, that omission only furthers concentration on the music rather than arbitrary distinctions of personality.

The prominence of the horn on the bonafide standard "My Funny Valentine" is. in fact. the point where the performance takes flight and continues in and out of four numbers, including "Finders Keepers," where Saunders' agile playing on clavinet begs the question of why he didn't use it more often. As the band continues in close unison, up to and through the free-form piece "Lion's Share Jam," the mutually inspiring spontaneity makes "How Sweet It Is to be Love By You" sound like a statement of gratitude from the leader to his bandmates (and, by extension, the audience) as much as an authoritative conclusion to the performance.

Betty Cantor-Jackson's recording hasn't the usual depth and clarity of her work, but as essayist Benjy Eisen points out, this was an innately informal affair and didn't call for anything more than a reference tape. Elsewhere in his slightly meandering liner notes, the author's most salient point centers on the multiple projects Jerry Garcia was embarking upon around this time, just prior to the 1974 hiatus of the Grateful Dead, in essence, laying the foundation for his future solo career. In this context, Garcia Live Volume Six documents a starting point for ongoing endeavors he would refine the remainder of his life.

CD 1: After Midnight; Someday Baby; She’s Got Charisma ->That’s Alright, Mama. CD 2: The System; The Night They Drove Old Dixie Down; I Second That Emotion; My Funny Valentine; Finders Keepers. CD 3: Money Honey; Like A Road; Merl’s Tune ->Lion’s Share Jam; How Sweet It Is (To Be Loved By You).