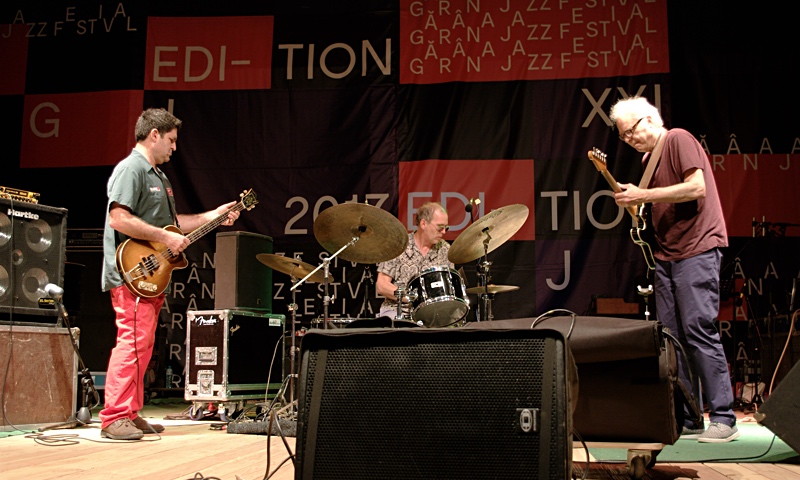 Running from the 6-9th of July, the 21st edition of the Garana Jazz Festival saw the jazz world descend on its location near the Garana village, high in the Semenic Mountains of Romania. Obviously, the artistic credibility and the creative energy were the hallmarks of this year's edition as the festival boasted enormous audience attendance during the four days. This year the festival presented a wide spectrum of artists from the jazz world and beyond, ranging from well-established artists or high voltage star power complemented with up-and-coming musicians and emerging local talents. As such, it was a stirring showcase of first class music where the selection of artists was diverse and of a caliber that is not often experienced elsewhere in the region.

Since its inception in 1997, through the years, Garana Festival's reputation has gained increasing visibility on an international scale which itself is a true achievement considering how distant it is from the country's biggest centers—Timisoara or Bucharest. Located in the remote area of the mountainous region of the western Carpathians, the festival's surroundings are truly magical with its endless woods and surrounding lakes. It's as if the locations were taken from a travel book by writer Mihail Sadoveanu. The surrounding hills and lakes are as important as the festival itself as the scenery also contributes to the overall feel of how the festival is perceived and enjoyed. Production wise it is very demanding but obviously adversity sometimes causes people to think outside the box and as a result, Garana festival has built a loyal and resilient audience who have been coming here for years from various corners of the country and from abroad. As the performances start the nights get chillier since the festival is happening on a higher altitude or a sudden rain might break but that doesn't make a difference as the audience is prepared for anything. The region is a popular tourist destination for native Romanians during the summer and festival's surroundings were filled with every kind of tent and camper.

But for me, the festival started even before I listened to the first notes. Some of the bands were traveling to Garana from Belgrade (Serbia) which is where I was picked up along with the festival's opening act Tonbruket. Tonbruket are a fabulous bunch of people and for the next several hours we had plenty of talks and jokes. Since all of the band members have played in various other projects we reminiscent of their past performances and projects at other festivals.

And the band was simply great during that opening night. Tonbruket truly defies any categorization when attempting to explain or describe its music as it draws from a plethora of other musics and experiences. Its music, which aesthetically has that roughness of a rock band, has been combined with the sensibility and the playfulness of jazz music and that is just a starting point for what they bring into their music. All throughout its set, it was obvious that the band boasts some very talented musicians. Drummer Andreas Werliin's propulsive and sometimes tribal beats drove the band forward and along with Martin Hederos's playful and bubbly vintage keyboards it did remind of early Pink Floyd and they even slightly referenced "Interstellar Overdrive" during the set. All of this was expanded by Dan Berglund's thick bass lines. Tonbruket seems to extract whole ecosystems of music from another era and bring them to life now. Guitarist Johan Lindström's melodic guitar lines easily electrified the music with an emotional intensity and he added a huge variety to its sound palette when he played the pedal steel guitar. But beyond that, its music sat in a slow-boil place between composed and improvised music. It was an assembly of weird and capable equals making great music and feel.

The performance of guitarist Wolfgang Muthspiel was, for the most part, a low-key affair. Surrounded by a group of supreme musicians such as the Larry Grenadier on bass and Jeff Ballard on drums, Gwilym Simcock on piano and Ralph Alessi on trumpet, most of his material was lyrical and emotional but the tempos were all even or at a sluggish pace with large passages with very little activity. While the dynamics slightly shifted at moments all of this sounded very unconvincing to my ears.

But what dominated in the festival's program were artists that are in any way related to the German label ECM where some of them were even performing material/projects that are still unrecorded. Such was the performance of guitarist David Torn, saxophonist Tim Berne and drummer Ches Smith under the banner of The Sun of Goldfinger. The trio's performance was one of the highlights of this festival as its music went far beyond the borders of either jazz, rock, electronic and improvised music and wowed everyone in the attendance.

As is known all of these musicians have played together in different configurations either with Torn's Prezens or Berne's Snakeoil. Torn's own discography indicates an artist whose vision is expansive and cross-genre music. He has stretched the sound of his guitar way beyond its conventional limits and has brought a completely different aesthetic to sonic layering and aural sound sculpturing. Torn is a master of looping, processing, and textures and it was this exploratory and colorful aesthetic that he brought into this trio. Throughout the lengthy sets, he created a constantly shifting network of dissonant and consonant textures. Berne's often powerful and dissonant sax lines and sounds had different roles. Sometimes he acted as an accompanist, sometimes he created minimalistic repetitive lines on the sax or would directly engage in a duel with the others.

The Sun of Goldfinger is a trio capable of great extremes, but it's equally capable of subtle beauty. The Trio easily shifted between pre-written and improvised parts and on the spot it created music with unexpected sonic colors that had to be seen and experienced to be believed. It was improv-heavy and sometimes it was obliquely beautiful music that obviously has stemmed from many sources. Together they ventured into uncharted territories of both shape and sound. Obviously, the pre-written parts were kept minimal so as to let the improvisations take a center stage. As a result, the trio responded with an appealing mix of textures, dark melodies and complex phrasing that appeared out of nowhere but were full of organic feeling. And it was these astonishingly beautiful and unheard sounds and textures and musical sensibilities that have managed to keep things creative all throughout their set.

The program of the festival also included morning concerts that took place at the Văliug Catholic Church where local Romanian bands such as Mircea Tiberian & Marta Hristea and Arcuș Trio performed.

Several rising stars delivered noteworthy performances, like the Vasil Hadžimanov band who gave a great performance. The band sounded as tight as always and it gave the audience their all. The band consists of extraordinary virtuoso players and there were chops abound throughout the performance, but the band has grown beyond superfluous displays of virtuosity and its early Weather Report template. The set list was a mixture of upbeat and slower songs as well as improvisations. Apart from playing selections like "Zulu" and "Dolazim" from their last record, Alive, and one of Hadzimanov's most renowned compositions "Ohrid" the set, for the most part, consisted of new compositions that will find their place in a new album hopefully next year. This is a habit that Hadzimanov has to road test his compositions before he records them and he delivered wonderful gems of songs titled as "Hadji," "Milkin Fun" and "Tunnel." The performance of Nguyen Le with Ngo Hong Quang that followed elevated the excitement and the dynamics even further during the third evening. Le's recent projects seem to be not only diverse and unpredictable, but they are reflecting a multicultural world where anything is possible. He is a French born artist of Vietnamese origins and yet this perfectly sums up his colorful and multifaceted music that in a way reflects the Paris' diverse global musical culture and his desire to reconnect with his own Vietnamese origins and culture. Actually, Le's entire career has been predicated on cross-genre boundary busting and in return, this has yielded some fascinating musical hybrids throughout the years in his oeuvre where one of them is the project Ha Noi, a duet with Vietnamese singer and multi-instrumentalist Ngô Hong Quang. At Garana they were joined by Stéphane Edouard, a master percussionist who not only worked with Le on this project but on the Saiyuki record as well.

Le, who is a virtuoso master of the electric guitar on the path of the great Jimi Hendrix showcased his mastery of the guitar with which he easily melted both modern and traditional sounds, melodies and harmonies. In his hand, the guitar is not just an ax for showing off, but a whole orchestra as he dig deep into the wellspring of Vietnamese traditional songbook. The set list consisted of songs from the record that ranged from both quiet folk songs and ballads to dynamic funky songs augmented by Edouard's powerful and unique percussion to great effect. This virtuosic percussionist engaged in dialogues with the other two and sometimes he combined various percussion instruments so seamlessly as to suggest two players, not just one. On the more dynamic songs, he energized the music with thundering grooves that inspired Le to provide some jaw dropping rapid fire deliveries.

The overall feel was that this music was a cultural mélange and good fun that combined unusual arrangements and extraordinary musicianship. The whole set was simultaneously forward looking and rooted in tradition. In the midst of it, rain began to fall, but none of the people in the audience moved from their seats. That's how good it was.

As befits it, the festival featured jazz from around the globe and it welcomed Cuban pianist Omar Sosa's Quarteto Afrocubano. Dressed in vivid white garb he walked on stage slowly and played slowly on the piano and was backed by a very able and versatile band. His music is evidently inspired by Cuba's rich musical traditions which he married with a varied number of sources within the jazz spectrum and beyond. Within his music, there are traces of various strands of African music and its diaspora which he juxtaposes into something unique where the whole is greater than the sum of its parts, but its heartbeat is definitely Cuban. The band gave a rollicking performance with its diverse and imaginative repertoire where they played their wonderful compositions and also sang.