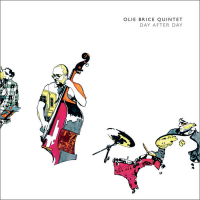 Three years on from the debut album by the Olie Brice Quintet, Immune to Clockwork (Multikulti Project, 2014), comes the follow-up, Day after Day. Despite the unchanged band name, the intervening years have brought changes; not only has the band switched record labels from Multikulti to Babel, tenor saxophonist Mark Hanslip has been replaced by George Crowley, and Polish alto clarinetist Wacław Zimpel by alto saxophonist Mike Fletcher. Despite those changes, most of the things that made the quintet work remain firmly in place; Alex Bonney is still there on cornet, his distinctive sound being the clarion call that opens the album and recurs throughout; the rhythm section of Brice on double bass and Jeff Williams on drums is also untouched, as before, keeping time without being intrusive or rigid and also acting as vital, dynamic members of the quintet.

Importantly, the new members have toured with the quintet and slotted in, already sounding as if they have been there for some time, doubtless helped by the album being recorded in June 2016, in the immediate aftermath of a UK tour for which Brice wrote this new material. In his sleeve notes, Brice makes reference to influences on the album's compositions; these include his reading matter at the time, Nathaniel Mackey's "From a Broken Bottle Traces of Perfume Still Emanate" series of novels about musicians "for whom there is no outside of music, for whom improvisation and performance are ways of being," plus Brice's own experience of growing up in a Jewish community and the ecstatic joy of his favourite free jazz. Somehow those elements combined to give an occasional melancholy mood but, as before, the leader displays sound instincts about his compositions and choice of material for the band.

Compared to the first edition of the quintet, this one features more individual extended soloing than the former more collective approach, with the new members noticeably soloing for longer. Maybe to counteract this tendency, Brice has included three "Interruptions," one as a stand-alone track and the other two occurring during other pieces. Brice says that these sections were inspired by listening to Wadada Leo Smith compositions. These looser passages are very welcome and serve to dilute the feeling of a "queue of soloists." The eight-minute title track, which closes the album, has more of an ensemble approach and this contributes to it being the album's strongest piece. Taken as a whole, Day After Day makes satisfying listening but it leaves the impression that this edition of the band will produce a better album still.

(Check out the YouTube clip below of "Red Honey, Yellow Honey" recorded live at the Vortex on that 2016 tour.)

Aunt Nancy’s Balloons; Red Honey, Yellow Honey; Interruptions #1: Another Mad Yak; If You Were the Only Girl in the World; Day after Day.