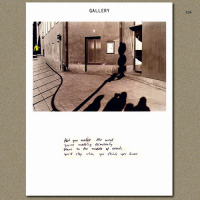 Today's discovery is in my top 10 list of albums screaming for first-time issue on CD by Munich's venerable ECM Records. Gallery was a one-off, teaming vibraphonist Dave Samuels and Oregon's Paul McCandless with cellist David Darling, bassist Ratzo Harris and Michael DiPasqua—a drummer who, with a resume on the label that included Ralph Towner, Jan Garbarek, Double Image and Eberhard Weber, was well on his way to becoming a label staple before suddenly abandoning music completely for a quarter-century, until Weber managed to coax him back for Endless Days (ECM, 2001) and the more recent Résumé (ECM, 2012).

Still, those were just two appearances..and it would seem that they will be his last. In a 2013 All About Jazz interview with Weber, the bassist—who has, himself, been forcibly retired from bass playing as the result of a 2007 stroke—described re-recruiting Di Pasqua: "He was a great drummer," Weber recounted, "and I reactivated him for Endless Days. He hadn't played for 14 years, and he told me that he practiced a lot for that session. But he also said he was frustrated because in 14 years, you lose a lot of technical ability; but I thought that he managed to do it all really nicely.

"And then I thought, again, why shouldn't I ask them to play on Résumé," Weber continues. "He said, 'Yes, I can try,' but in the end, it's been even longer since he last played. Now he is saying that he doesn't think he will continue playing. He realizes now that the young drummers, they play the hell out of the drum set, and he just can't keep up with them. Michael may not have the chops he had 20 years ago, but the musicality is still there, and you can hear it on the record—the experience."

Experience that can also be heard on Gallery, available to me thanks to the hard work of a close friend who ripped it from vinyl and, after painstakingly declicking and denoising it, transferred it to CD. Largely ethereal in nature, the record features, in addition to three Samuels originals, one from McCandless, one by drummer/vibraphonist Glenn Cronkhite—best known for his tenure in pianist Art Lande's Rubisa Patrol, appearing on the group's self-titled 1976 ECM debut but largely (and sadly) relegated to obscurity since—along with a rare Di Pasqua composition...and one, credited collaboratively, to Gallery and ECM founder/producer Manfred Eicher.

That Gallery/Eicher composition, the dark-hued "Painting," is really more endemic of Eicher's role as an active producer on most of the label's large discography. In truth, he is generally thought of as an added member to any ensemble he produces in the studio, making trios a quartet, quartets a quintet, quintets...well, you get the idea. And so this collective improvisation would have really have been business as usual for Eicher (though saying "business as usual" understates the diversity of his rich catalog), who often provides encouragement, occasional discouragement and always musical ideas that range from arrangement to instrumentation. In some ways it's a surprise that he is not co-credited more often—he has even been known to add, largely uncredited, the occasional cymbal or even a bit of the double bass that was his instrument before largely giving it up in favor of producing. Who knows what his contribution was here, but it was clearly significant enough to warrant receiving actual credit. Improvised though it may be at its heart, it's far from lacking in form as McCandless—restricting himself to just soprano saxophone and English horn for this session—comes together with cellist Darling for a unison line that is unpredictable...yet, ultimately, both lyrical and memorable.

Di Pasqua's delicate cymbal work is at the core of much of this record, though his kit work is equally impressive, especially on Cronkhite's propulsive "Egret" where, if the band doesn't exactly reach boiling point, it certainly approaches an effervescent simmer. This, coming after one of the album's more oblique yet melodic compositions, McCandless' "Pale Sun," a song he would subsequently revisit with Oregon on the group's percussion-less trio date Troika (Intuition, 1994), but which here is even more atmospheric, with Di Pasqua's percussion and Samuels' ethereal clouds of vibraphone.

Still, as much as Gallery is largely gossamer-light—or, perhaps more appropriately, because of it—the group's profound interaction makes it a thoroughly compelling listen, from Samuels' appropriately floating opener "Soaring" to the bleaker beauty of "Night Rain."

Gallery would be Samuels' final recording for ECM, after the dual mallet group Double Image's Dawn (1979) and his trio set with McCandless and Lande, Skylight (1981). Every album is special, but Gallery stands just a touch above the rest, with its larger unit creating a more expansive sound world drawn from a broader sonic palette that still sounds wonderful more than three decades later. Now, if only ECM would release this wonderful recording, so worthy of Rediscovery, as part of the Re:solutions series it kicked off in 2014 with seven release ranging from 1981's Miroslav Vitous Group to 1982's Ralph Towner/John Abercrombie collaboration, Five Years Later. More, please!