By Dan McClenaghan
October 10, 2009
Sign in to view read count 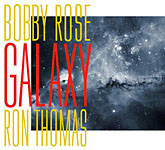 On Galaxy a couple of mainstream jazz guys sit down and plug in to see where the interstellar winds will take them.

The profiles of guitarist Bobby Rosengarden and keyboardist Ron Thomas, subject to the laws of gravity, have not achieved the heights commensurate with their talent—an old jazz story. But both are immensely creative artists. The duo has recorded, separately, albums with guitarist Pat Martino: the mainstream Footprints (Muse records, 1972) and the early foray into what we now call World Music, Baiyina (Prestige Records, 1968), in the case of Rose, while Ron Thomas contributed his considerable piano chops to Martino's Live! (Muse Records, 1972), a set that has be re-released as Head and Heart (32Jazz, 1998).

The work with the Wes Montgomery-influenced Martino was hot, tangy stuff, but it seems Rose and Thomas harbored—even in the late sixties and early seventies—a deep hankering to break free of the constraints of traditional jazz, to soar.

A decade into a new century, forty years after their Martino connection, Bobby Rose and Ron Thomas offer up Galaxy, taking their combined artistry and depth of talent straight up out of the stratosphere into deep jazz space.

Thomas has been the more active of the two players in terms of recording. His Music in Three Parts and Doloroso are a beautifully masterful surprise one-two punch of piano trio sets that reveal a rich classical background and a Bill Evans influence. No stranger to the musical Twilight Zone, his seriously "out there" Cycles and the slightly more retrained Elysium take things in an entirely different direction, one that points toward Galaxy.

These are electric sounds, luminescent spontaneous compositions that swoop and glow like swelling nebula, expanding washes of interstallar gas and expanses of dark gravity emitting sound waves (in atmospheric-less space?) that, more often than not, defy any effort to delineate the instrumentation involved—not that the identification of the sources of the sounds matter.

Galaxy, from the adventurous musical minds of Bobby Rose and Ron Thomas, seems challenging at first listen to the unaccustomed listener. But for those who can relax and let this experiment into their ears, it is a rewarding, zero-gravity experience.